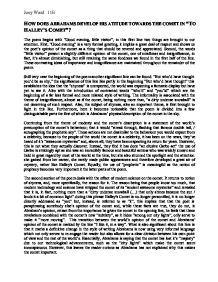 How does Abrahams develop his atitude toward the comet in 'To Halley's Comet'?

The poem begins with "Good evening, little visitor", in this first line two things are brought to our attention. First, "Good evening" is a very formal greeting, it implies a great deal of respect and shows us the poet's opinion of the comet as a thing that should be revered and appreciated. Second, the words "little visitor" present a slightly different opinion of the comet, one of smallness and insignificance, in fact, it's almost diminishing, but still retaining the same fondness we found in the first half of the line. These contrasting ideas of importance and insignificance are maintained throughout the remainder of the poem. Still very near the beginning of the poem another significant line can be found: "But who'd have thought you'd be so shy," the significance of this line lies partly in the beginning "But who'd have thought" this establishes the idea that the "shyness" is unexpected, the world was expecting a fantastic display but have yet to see it. Also with the introduction of contracted words "who'd" and "you'ld" which are the beginning of a far less formal and more relaxed style of writing. The informality is associated with the theme of insignificance, almost as if the comet, being nothing more than, "a dirty undense snowball" is not deserving of such respect. ...read more.

that only shines because the sun / lends it a bit of common light" during this phrase Halley's Comet is no-longer personified, it is no-longer directly addressed as "you" but, instead, is referred to as "it", this implies that that the poet is paraphrasing somebody else's opinion of the comet and, while these facts are true, they do not, in Abraham's opinion, retract from the importance he gives the comet in the opening line, he feels that these revelations combined with the comet's new "subtlety", as it hides "among our city lights", only serve to make it "more moving". This transition between the world's opinion of the comet and Abrahams' opinion of the comet is marked by the line "I like it, in a way". What is also significant about this line is that it marks a definitive change in the style of writing Abrahams is now using very informal language which not only serves to re-engage the reader but also allows for a clear division between his own point of view and the rest of the world's. Essentially, Abrahams is saying that the comet has lost it's "majesty" due to our technological advancements, such as the "city lights" which make the comet seem inconspicuous. ...read more.

Meaning that the comet is prophetic of itself returning and it is one of the few things that we can predict. Continuing with this idea he closes the poem by saying "We thank you, little comforter: / that the dark potent emptiness ahead / contains one probable smear of light" firstly, in this sentence Abrahams returns to the use of "we" showing that he speaks for the entire globe as he says this giving a lot of weight to the next lines of the poem. Secondly, use of "little comforter" mirrors the "little visitor" at the beginning of the poem, drawing more attention to these lines but also mirroring the feeling on fondness that we saw at the beginning of the poem. The comet is not seen as a foreteller of great events as it used to be. It has "shed its scary Nostradamus mask" and is not prophetic of human events anymore, but it is prophetic of its own return and in doing so fulfils its own prophecy, an this is the important message of the poem; that despite all we have done to damage the comet's image, it is, perhaps, more important than ever as because of our advances in technology we cannot possibly conceive what the world will be like the next time Halley's Comet arrives, but the one thing we can be sure of is that it will. ...read more.