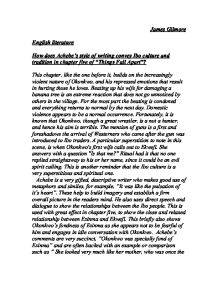 How does Achebe's style of writing convey Ibo culture and tradition in chapter five of &quot;Things Fall Apart&quot;?

James Gilmore English literature How does Achebe's style of writing convey Ibo culture and tradition in chapter five of "Things Fall Apart"? This chapter, like the one before it, builds on the increasingly violent nature of Okonkwo, and his repressed emotions that result in hurting those he loves. Beating up his wife for damaging a banana tree is an extreme reaction that does not go unnoticed by others in the village. For the most part the beating is condoned and everything returns to normal by the next day. Domestic violence appears to be a normal occurrence. Fortunately, it is known that Okonkwo, though a great wrestler, is a not a hunter, and hence his aim is terrible. The mention of guns is a first and foreshadows the arrival of Westerners who came after the gun was introduced to Ibo traders. ...read more.

This briefly also shows Okonkwo's fondness of Ezinma as she appears not to be fearful of him and engages in idle conversation with Okonkwo. Achebe's comments are very succinct, "Okonkwo was specially fond of Ezinma" and are often backed with an example or comparison such as " She looked very much like her mother, who was once the village beauty". This creates a firm idea with the reader and once again shows Achebe's excellent use of imagery. The good use of the contrast between descriptive passages and narratives, helps to highlight certain ideas which may not otherwise have been understood, making the novel clearer to read and comprehend. Achebe's use of exaggeration where Okonkwo shoots at his wife is extreme and brutal, as are many other of his actions. ...read more.

The experiences that both the the natives and the colonizers undergo are narrated by Achebe. He mainly speaks of the trauma, humiliation and slave mentality induced in their psyche. The colonizers write of their own experience which, according to them, is no less traumatizing. In Things Fall Apart, Achebe writes of the actual moment of colonization with the arrival of missionaries and the administrative apparatus of Britain at the turn of the century. His other works describe issues connected with colonization. Achebe's peculiarity is that he works in the genre of the English novel, although his concerns are mainly African. This style of writing is excellent at conveying any type of culture, as it could be said that it is basically written by a native in the language of the colonialists. Another celebrated Nigerian writer is Wole Soyinka, who uses theatre as a more traditional form to convey his views on the same issues. ...read more.