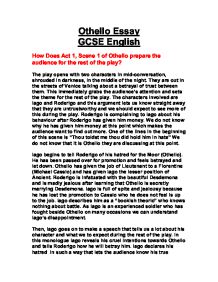 How does Act 1, Scene 1 of Othello prepare you for the rest of the play

Othello Essay GCSE English How Does Act 1, Scene 1 of Othello prepare the audience for the rest of the play? The play opens with two characters in mid-conversation, shrouded in darkness, in the middle of the night. They are out in the streets of Venice talking about a betrayal of trust between them. This immediately grabs the audience's attention and sets the theme for the rest of the play. The characters involved are Iago and Roderigo and this argument lets us know straight away that they are untrustworthy and we should expect to see more of this during the play. Roderigo is complaining to Iago about his behaviour after Roderigo has given him money. We do not know why he has given him money at this point which makes the audience want to find out more. ...read more.

In this monologue Iago reveals his cruel intentions towards Othello and tells Roderigo how he will betray him. Iago declares his hatred in such a way that lets the audience know his true character. For example, "In following him, I follow but myself", and "I am not what I am." This means that right at the beginning of the play the audience is well aware of his intentions towards other characters. So when we see scenes during the play it creates a sense of dramatic irony because the audience knows too well what Iago's plan is and what is really going on. Iago's first act of falseness is committed straight away... Brabantio saying, "Call up her father, rouse him, make after him, poison his delight." Iago and Roderigo go to Brabantio's house shouting obscenities, hidden by darkness. ...read more.

Roderigo doesn't seem to be aware that he is being used and is just as much a part of Iago's sordid plan as the other characters in the play. This scene takes place at night, which sets the atmosphere for the rest of the play of mystery, danger and betrayal. Many of the key scenes take place in darkness continuing the theme of gloom and concealment of evil deeds. Deception, manipulation and betrayal Shakespeare cleverly opens the play with a very negative picture painted by three characters that have more than enough reasons to be biased in their opinions. Iago is jealous of Cassio and angry at Othello because he has lost out on a promotion that he feels he deserves, Roderigo is jealous because he loves Desdemona and she has married Othello and Brabantio is persuaded that Othello has stolen his daughter away from him by wicked magic and has taken advantage of her. ...read more.

The analysis in this essay is sound, yet at times it tends to retell the story. For example, the second paragraph adds nothing to the essay other than showing knowledge of the scene. The essay must analyse the audience response to the plot rather than simply retelling it. I would've liked to have seen more reference to Shakespeare's construction throughout, as this allows a natural progression towards analysing why he chooses certain techniques and the effect they have on the audience. In my opinion, when looking at a particular scene you must talk of its significance to the rest of the play. I would've have drawn upon the audience's fear for Othello's position after Iago's plot unravels, building the suspense. An awareness of Othello's tragedy beginning would have been a good discussion point, also. There aren't enough quotes in this essay, meaning there is little analysis on imagery and language.

This essay has a clear chronological order, however I would've liked to have seen a clear introduction and conclusion. I wasn't too keen on seeing "IagoÃ¢â‚¬â„¢s first act of falseness is committed straight awayÃ¢â‚¬Â¦" appear in the middle of the essay. This isn't an English Language piece of creative writing. There is no place for this style in a formal essay! Other than that, spelling, punctuation and grammar are used well.