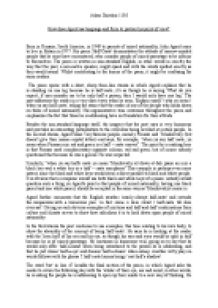 How does Agard use language and form to portray his viewpoint in 'Half-Caste?

﻿Adam Dziedzic 11M How does Agard use language and form to portray his point of view? Born in Guyana, South America, in 1949 to parents of mixed nationality, John Agard came to live in Britain in 1977. His poem 'Half-Caste' demonstrates the attitude of narrow-minded people that he must have encountered, who consider people of mixed parentage to be inferior to themselves. The poem is written in non-standard English, in other words in exactly the way that the poet, a non-native speaker, might speak and with the words spelled exactly as they would sound. Whilst contributing to the humor of the poem, it might be confusing for some readers. The poem opens with a short, sharp three-line stanza in which Agard explains that he is standing on one leg because he is half-caste; it's as though he is saying 'What do you expect, if you consider me to be only half a person, then I would only have one leg.' The poet addresses the reader in a very direct way when he says, 'Explain yuself / wha yu mean / when yu say half-caste', taking the stance that the reader is one of the people who looks down on those of mixed nationality. ...read more.

It is obvious that a composer would use both black and white keys of a piano: nobody would question such a thing, so Agard's point is that people of mixed nationality, having one black parent and one white parent, should be accepted in the same way as Tchaikovsky's music is. Agard further comments that the English weather 'nearly always half-caste' and extends the comparison with a humorous pun: 'in fact some o dem cloud / half-caste till dem overcast'. Giving us such obvious examples of mixtures and half-and-half combinations from culture and climate serves to show how ridiculous it is to look down upon people of mixed nationality. In the third stanza the poet continues to use examples, this time relating to his own body, to show the absurdity of the concept of being 'half-caste'. He says he is looking at the reader with the 'keen half' of his ear and his eye, as though his ears and eyes would be split in half because he is of mixed parentage. ...read more.

An open mind will allow them to see him as the person he really is, rather than some inferior being. The poem flows along through its four stanzas of varying length and lines also of varying length, unrestricted by punctuation; there are two forward slashes in the second stanza indicating a break or pause, but not one full-stop. Capital letters are also very few and far between, not being used, as I have mentioned for Picasso or Tchaikovsky. The lack of restrictions of regularity in terms of line length and stanza length, as well as sentence structure, indicate a desire for openness and freedom which suit the theme of the poem. The message of the poem is that we are all brothers, and we should stop being so closed ? minded. We are all equal and all deserve to be treated in the same way ? no matter where you are from. The very simple message is that someone of a mixed race is not inferior and should not be ?apologizing? for it. ...read more.

This student written piece of work is one of many that can be found in our GCSE Poems from Different Cultures section.