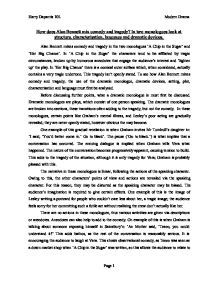 How does Alan Bennett mix comedy and tragedy? In two monologues look at structure, characterisation, language and dramatic devices.

How does Alan Bennett mix comedy and tragedy? In two monologues look at structure, characterisation, language and dramatic devices. Alan Bennett mixes comedy and tragedy in the two monologues 'A Chip in the Sugar' and 'Her Big Chance'. In 'A Chip in the Sugar' the characters tend to be afflicted by tragic circumstances, broken up by humorous anecdotes that engage the audience's interest and 'lighten up' the play. In 'Her Big Chance' there is a comical outer surface which, when considered, actually contains a very tragic undertone. This tragedy isn't openly stated. To see how Alan Bennett mixes comedy and tragedy, the use of the dramatic monologue, dramatic devices, setting, plot, characterisation and language must first be analysed. Before discussing further points, what a dramatic monologue is must first be discussed. Dramatic monologues are plays, which consist of one person speaking. The dramatic monologues are broken into sections, these transitions often adding to the tragedy, but not the comedy. In these monologues, certain points like Graham's mental illness, and Lesley's poor acting are gradually revealed; they are never openly stated, however obvious the may become. One example of this gradual revelation is when Graham invites Mr Turnbull's daughter in: 'I said, 'You'd better come in.' Go to black'. The pause ('Go to black.') is what implies that a conversation has occurred. The ensuing dialogue is implied when Graham tells Vera what happened. The nature of the conversation becomes progressively apparent, causing tension to build. This adds to the tragedy of the situation, although it is only tragedy for Vera; Graham is probably pleased with this. The narrative in these monologues is linear, following the actions of the speaking character. Owing to this, the other characters' points of view and actions are revealed via the speaking character. For this reason, they may be distorted as the speaking character may be biased. The audience's imagination is required to give certain effects. ...read more.

Settings like this help to get the plot moving, and add to the structure of the monologues. These monologues have carefully considered structures, which help to enhance the tragedy and comedy. Both of the plays have tragic plots. In 'A Chip in the Sugar', Graham's mother first deserts him for Mr Turnbull, which creates tragedy for Graham. The when she splits up with Mr Turnbull, there is tragedy for her. In 'Her Big Chance', Lesley is a tragically incompetent actress who is excited about getting a part in a film. The audience soon learns that not only is the film dreadful, but the part she plays in it is simply aesthetic, and she has only one small line. In 'A Chip in the Sugar' the tragic aspects are gradually built up to create an image in the audience's mind and allow for speculation. It is structured so that the audience is never sure of anything right up until the end. One example of this is Vera's commonplace line 'Take one of your tablets.' This brings about gradual insight into Graham's mental state, as he must need to take tablets for something, and the implication is that they calm him down; the circumstances in which she says it. There is also withheld information apparent; Graham never actually says what he needs the tablets for. As 'A Chip in the Sugar' reaches its climax, his illness is made clearer and eventually obvious, creating an effect of escalating tragedy. An example of this tragedy being made clearer towards the end of 'A Chip in the Sugar' is the line 'I've a feeling somebody's looking at the house, only I can't see anybody.' This shows that Graham's mental illness is probably paranoia, as he needs tablets and is obsessed with the fact that someone's watching the house. This quote also brings about the fact that Graham is concerned about his illness, as he doesn't trust his senses. ...read more.

The real truth of Alzheimer's disease and its effect on the elderly is far from funny, adding true tragedy into these plays. Also, in 'Her Big Chance', Lesley's naivety and manipulability may seem humorous, but to a lesser extent similar people exist. The fact that slightly less stereotypical characters, similar to those in the plays, exist makes the tragedy all the more real. It can also make the comedy more effective, for example Vera using disabled toilets for the 'elbow room' is a humorous concept, although the reality of the situation make it all the more humorous. Similarly, the help group Graham attends is stereotypical to the point that it becomes extremely funny. In conclusion, Alan Bennett uses many different methods to intertwine comedy with tragedy in 'A Chip in the Sugar' and 'Her Big Chance'. He uses some aspects of the monologues to convey a single theme (comedy or tragedy), and uses various layers within these aspects to give the effect of simultaneous comedy and tragedy. The use of dramatic devices helps to add emphasis to both comedy and tragedy, without creating any of either; they simply magnify the effects of the rest of the texts. The settings of the plays are separately comic and tragic; most settings are dull, therefore tragic but very few are comic. The plots of both monologues are tragic, whereas the structures of them help to gradually build up the tragedy and also create some comedy. In 'A Chip in the Sugar' and 'Her Big Chance' the characterisation is usually comic and tragic simultaneously; a comic surface which, with consideration, disperses to reveal a deeper tragic layer beneath. Language is used in both plays to create comedy and tragedy, often at the same time, to create the right balance. Language tends to be the comic surface, concealing the tragic undertone. Alan Bennett also uses parodies of real life situations to heighten both comedy and tragedy, but mostly tragedy. This clever, complex structure creates a deep effect, with comedy and tragedy working on different levels. Harry Dayantis 10L Modern Drama Page 1 ...read more.