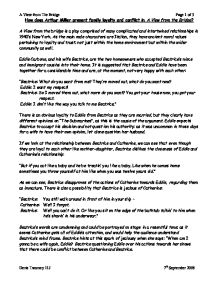 A View from the bridge is a play comprised of many complicated and intertwined relationships in 1940’s New York. As the main male characters are Italian, they have ancient moral values pertaining to loyalty and trust; not just within the home environment but within the wider community as well.

Eddie Carbone, and his wife Beatrice, are the two homeowners who accepted Beatrice’s niece and immigrant cousins into their home. It is suggested that Beatrice and Eddie have been together for a considerable time and are, at the moment, not very happy with each other:

Eddie: I want my respect!

Beatrice: So I moved them out, what more do you want? You got your house now, you got your respect.

Eddie: I don’t like the way you talk to me Beatrice.”

There is an obvious loyalty to Eddie from Beatrice as they are married, but they clearly have different opinions on “The Submarines”, as this is the cause of the argument. Eddie expects Beatrice to accept his decision and not question his authority; as it was uncommon in those days for a wife to have their own opinion, let alone question her husband.

As we can see, Beatrice disapproves of the actions of Catherine towards Eddie, regarding them as immature. There is also a possibility that Beatrice is jealous of Catherine:

Beatrice:        Well you can’t do it. Or like you sit on the edge of the bathtub talkin’ to him when he’s shavin’ in his underwear.”

Beatrice’s words are condemning and could be portrayed on stage in a resentful tone; as it seems Catherine gets all of Eddie’s attention, and would help the audience understand Beatrice’s mind frame. Beatrice hints at this spark of jealousy when she says: “When am I gonna be a wife again, Eddie? Beatrice questioning Eddie over his actions towards her shows that there could be conflict between Catherine and Beatrice.

Catherine is very loyal to Eddie as he has support to her throughout her life:

Eddie: Look did I ask you for money? I supported you this long I support you a little more.”

As we can see, there are paternal emotions from Eddie, which obviously strengthens Eddie and Catherine’s relationship as he watches out for her. However, conflict arises between these two people when Catherine starts dating Rodolpho:

“Eddie: He marries you he got the right to be an American citizen. That’s what goin’ on here.”

Eddie is adamant that Rodolpho is trying to marry Catherine so he can be a US citizen, and does not want his niece “used”; ironically, this paternal loyalty causes a serious conflict. Nevertheless, we see later on from Eddie’s actions that he may have an ulterior motive in trying to stop Catherine being with Rodolpho:

“He [Eddie] reaches out suddenly, draws her [Catherine] to him, and as she strives to free herself he kisses her on the mouth.”

From this stage direction, we can assume that Eddie has a feeling of love or lust towards Catherine. When Rodolpho is introduced as a character, Eddie feels jealous that Catherine has feelings for Rodolopo and so tries to remove the threat. Eddie does this by accusing Rodolpho of trying to gain citizenship by marrying Catherine under false pretences and questioning Rodolpho sexuality. At this time, homosexuality was frowned upon (and illegal in some states) and many men accused of being gay were shunned by society.

Marco and Rodolpho are close and are loyal to one another:

We can see that the fraternal bond between these two men is strong and Marco will go to any lengths to get revenge on his humiliated brother. It is interesting to note what Alfieri says to Marco about his bail:

There is no doubt that Alfieri could bail out very quickly, yet he would not until Marco promised not to get revenge on Eddie. Alfieri knows of Marco’s ethics and fraternal loyalty: Marco would seek vengeance on Eddie as soon as he was bailed. However, Alfieri also knows that if Marco promised not to do something, he would not do it. Nevertheless, we see that even though Marco promised to not harm or go near Eddie, he breaks this promise to Alfieri and eventually kills Eddie; just to uphold his family honour.

In conclusion, Arthur Miller presents us with a complicated web of family ties. Marco and Rodolpho’s arrival creates a lot of dramatic tension between the characters, mainly centred on Eddie. His mixed emotions of lust towards Catherine, anger at her wedding to Rodolpho coupled with a sense of family loyalty drive him to phone Immigration and get Marco and Rodolpho arrested (ironically it is Eddie who warns Beatrice and Catherine of the dangers of letting immigration know about “the Submarines” and the eventual consequences). In the end, Marco does uphold his family honour but breaks his promise to Alfieri by killing Eddie.