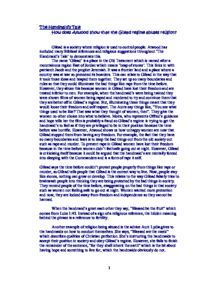 How does Atwood show that the Gilead regime abuses religion?

The Handmaid's Tale How does Atwood show that the Gilead regime abuses religion? Gilead is a society where religion is used to control people. Atwood has included many Biblical references and religious suggestions throughout 'The Handmaid's Tale' to demonstrate this. The name 'Gilead' is a place in the Old Testament which is named after a mountainous region East of Jordan which means 'heap of stones'. This links in with patriarch Jacob and the prophet Jeremiah. It was a frontier land and a place where a country was at war so protected its boarders. This can relate to Gilead in the way that it took those ideas and heaped them together. They set up so many boundaries and rules so that they could illuminate the bad things like r**e from the time before. However, they abuse this because women in Gilead have lost their freedom and are treated inferior to men. For example, when the handmaid's were being trained they were shown films of women being raped and murdered to try and convince them that they are better off in Gilead's regime. But, illuminating these things meant that they would loose their freedom and self respect. ...read more.

She says, "Blessed are the meek" which describes qualities of Christian perfection. She's instructing the handmaids to accept their position in society and obey Gilead's regime. However, she fails to finish the remainder of the sentence, "for they shall inherit the earth" which is the bit about having hope and something to live for, which the handmaids obviously do not. Offred's visit to Jezebel's is significant because the word 'Jezebel' is a name taken from the Bible who was a wicked scarlet woman. (Kings 21:15.) The name has different meanings in which Atwood wants us to interpret. The name refers to how women are treated in Gilead and how men abuse Gilead's regime in which they invented. 'Jezebel' was wicked and so therefore, in a sense, men are naming the prostitutes wicked even though the women didn't have much choice in whether they wanted to be there. Women had little choice in which status or role they would choose as part of Gilead's regime. If they were fertile they should choose the role of a handmaid because eventually they would get an element of freedom if they were able to conceive. If they were infertile then they were better off being a prostitute because their job is to please, not produce. ...read more.

The prayers are printed out by machines, 'row on row of them' which is impersonal and 'disrespectful' because it is as the store is like a take away ordering service. Everyone has the same prayer, like everyone has the same meal at McDonalds. The fact that the machines are not even run by humans portrays the sheer selfishness of Gilead because they aren't putting any thought or effort in to it. Offred says, "Ordering prayers from Soul Scrolls is supposed to be a sign of piety and faithfulness, to the regime" so, people aren't ordering them for what they are; their ordering them because that is what they are there for. Even the wives conform to the fact that "It help's their husband's careers". The machines have a logo on them that happens to be an eye. This is evidence to show how much the prayers are used as a business scheme. The eye could represent Gilead how people behave and if they are following the regime correctly. After the prayers are used, the paper is recycled. On the surface, this may seem like a good thing but in reality if people truly believed that the regime was important and the prayers were sacred, then they wouldn't throw away holy documents. People wouldn't read the Bible and then dispose of it. ?? ?? ?? ?? 1 ...read more.