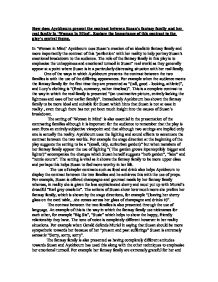 How does Ayckbourn present the contrast between Susan's fantasy family and her real family in 'Woman in Mind'. Explore the importance of this contrast to the play's central theme.

How does Ayckbourn present the contrast between Susan's fantasy family and her real family in 'Woman in Mind'. Explore the importance of this contrast to the play's central theme. In 'Woman in Mind' Ayckbourn uses Susan's creation of an idealistic fantasy family and more importantly the contrast of this 'perfection' with her reality to help portray Susan's emotional breakdown to the audience. The role of the fantasy family in this play is to emphasise the unhappiness and emotional turmoil in Susan'' real world as they generally appear at a point where Susan is in a particularly distressing situation with her real family. One of the ways in which Ayckbourn presents the contrast between the two families is with the use of the differing appearances. For example when the audience meets the fantasy family for the first time they are presented as "(tall, good - looking, athletic)", and Lucy's clothing is "(fresh, summery, rather timeless)". This is a complete contrast to the way in which the real family is presented "(an unattractive picture, entirely lacking the lightness and ease of her earlier family)". Immediately Ayckbourn has shown the fantasy family to be more ideal and suitable for Susan which hints that Susan is not at ease in reality , even though there has not yet been much insight into the causes of Susan's breakdown. ...read more.

Gerald and Susan have conflicting opinions even about small unimportant things for example, they have different opinions over the bush in their garden. Gerald calls it a "dead bush" whereas Susan claims : "It's not dead I planted it yesterday". Gerald is also very unsympathetic towards Susan's turmoil, for example when Susan says she is not very happy, Gerald's unhelpful viewpoint is "well who is? These days. Very few". Gerald seems too interested in the book he is writing which is an important factor in Susan's breakdown. The lack of a physical side in their relationship leads Susan into the arms of her imaginary lover Andy, whilst in reality she has burnt Gerald's history of the parish "All sixty pages blazing away". More importantly Gerald seems very unaware of the change in his relationship with Susan. For example when Susan tells Gerald she does not love him anymore, Gerald's response is "I'm not aware my feelings towards you have altered that much" which gives a clear insight into the lack of closeness in their relationship to the audience. Susan's emotional breakdown is also caused by her relationship with Rick which Ayckbourn presents as one without the usual mother-son communication. ...read more.

Susan does have , at that stage still have some control over her life as she is able to banish her fantasy family whenever she wants. The complete contrast in families is extremely important in showing Susan's emotional breakdown because the fantasy family has been perfected down to every last detail in Susan's mind and shows the ideal life Susan would love to lead. However because of the idealism the fantasy family provides Susan becomes less and less able to control her own creation. This is shown in act two where her fantasy life and reality become mixed and she has entered a world of madness created by herself "(What we see are images remembered by her from films she has seen, books she has read, TV she has watched)". By this stage in her breakdown Gerald seems to know the fantasy family and talks to them in the light-hearted language that they used with Susan earlier "Tony, you old rascal...". Whereas it was only in reality that Susan felt ignored which forced her into an imaginary world where she was loved and treasured, now it seems that neither of her families are taking notice of her: "LOOK AT ME AT ONCE, DO YOU HEAR? ALL OF YOU!!!". This is the final point in Susan's breakdown. ...read more.