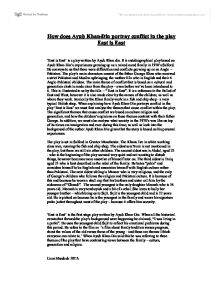 How does Ayub Khan-Din portray conflict in the play East is East 'East is East' is a play written by Ayub Khan din. It is autobiographical play based on Ayub Khan-Din's experiences growing up as a mixed raced family in 1970's Salford. He conveys to us that there were difficulties and conflicts growing up as an Anglo - Pakistani. The play's main characters consist of the father George Khan who received a strict Pakistani and Muslim upbringing, the mother Ella who is English and their 6 Anglo-Pakistani children. The main theme of conflict that is based on a cultural and generation clash is made clear from the play - even before we've been introduced to it. This is illustrated to us by the title - " East is East". It is a reference to the Ballad of East and West, however it is also made clear by the names of the children, as well as where they work. Ironically the Khan family work in a fish and chip shop - a very typical British shop. When explaining how Ayub Khan-Din portrays conflict in the play 'East is East' we must first analyse the themes that cause conflict within the play. The significant themes that cause conflict are based on culture religion and generation, and how the children's opinions on these themes contrast with their father George. In addition, we must also analyse what society in the 1970's was like on top of its views on immigration and race during this time; as well as look into the background of the author Ayub Khan-Din given that the story is based on his personal experiences. The play is set in Salford in Greater Manchester. The Khans live in white working class area, running the fish and chip shop. The eldest son Nazir is not mentioned in the play, but there are still six other children. ...read more.

He kicks and beats her.' (Stage directions) At this point our opinion of George would be very negative and some would probably consider that for his domestic violence against his wife that he is evil. He is also referred to by his children as "Genghis" in a reference to the ruthless Genghis Khan. Perhaps, the reason for his violent behaviour is because he received the same from his family. It is not until the end of the story that we see that he really does love his family and only wants to push the Pakistani and Muslim culture on them because he wants them to have a good life. " I only try to help you son, I no b****y hurt you, I love my family. I have to b****y stick up for family when people calling." It is only then that it is illustrated to us that George does everything in what he believes is best for his kids. The second significant them portrayed to cause conflict within play is on the subject of religion. George has raised his family to be Muslims, as he himself is a strict Muslim. We first discover this when he reacts franticly to discovering the youngest Sajit has never been circumcised. "I can't look Mullah in the b****y face now! Because he got b****y tickle - tackle." "Your son no Muslim with this thing, when he die he go straight to h**l." This highlights to us that George is strictly Muslim, as it would not have alarmed him so much if he were not. On the contrary, apart from Maneer, the kids are not very religious, and react differently to the situation. "The jammy little b*****d, how's he got away with that for so long. God, what I wouldn't give for a foreskin." Maneer replies "foreskins are dirty." "If they're dirty, what are they doing there in the first place?" ...read more.

This reflects how he has developed significantly, and by the end manages to stand up against his dad and assert himself. In conclusion, I believe that the three significant ways that Ayub Khan-Din portrays conflict in the play is by illustrating it to us by using the themes of culture, religion and generation. This is because these are the main things that would cause controversy in story about a family of a Pakistani man, his English wife, and their seven mixed raced children, living in 1970s Salford. Especially since their father is trying to raise them incredibly differently from the rest of the people around them, and they are reluctant to let him do so. Contrasting views on culture would arise easily as it seems nearly impossible to bring you culture from one country, and attempt to bring your children up within that culture when they are constantly surrounded by people who follow a different culture, and they only want to fit in. Cultural conflicts were only enhanced during this period because of the racial tension caused by Enoch Powell. Ayub Khan-Din portrays these conflicts by showing us the contrasting opinions of the children and showing their clear lack of cultural identity. He shows disputes over the religion by emphasises that all the kids except for Maneer do not really care about Islam. For example, showing that they eat pork and that Sajit had gone 12 years without being circumcised. Finally, the conflicts of generation are illustrated to us through Tariq and Abdul, and how they stand up to their dad by defying what he considers to be right. Obviously, with George having an age difference of 20 - 30 years between his children his opinions may clash with those of his kids. Especially when they live in a culture that encourages freedom of speech and being able to express oneself. Which leads me to suggest that it is that it is the combination of all these themes that enables Ayub-Khan-Din to portray conflict so well in the play 'East is East.' ?? ?? ?? ?? Liam Murdock 10TA ...read more.