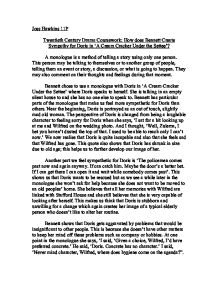 How does Bennett Create Sympathy for Dorisin 'A Cream Cracker Under the Settee'?

Joss Hawkins 11P Twentieth Century Drama Coursework: How does Bennett Create Sympathy for Doris in 'A Cream Cracker Under the Settee'? A monologue is a method of telling a story using only one person. This person may be talking to themselves or to another group of people, telling them an event or story, a discussion, or what is going to happen. They may also comment on their thoughts and feelings during that moment. Bennett chose to use a monologue with Doris in 'A Cream Cracker Under the Settee' where Doris speaks to herself. She is talking in an empty silent house to and she has no one else to speak to. Bennett has particular parts of the monologue that make us feel more sympathetic for Doris than others. ...read more.

If I can get there I can open it and wait while somebody comes past'. This shows us that Doris wants to be rescued but as we see a while later in the monologue she won't ask for help because she does not want to be moved to an old peoples' home. She believes that all her memories with Wilfred are linked with Stafford House and she still believes that she is very capable of looking after herself. This makes us think that Doris is stubborn and unwilling for a change which again creates her image of a typical elderly person who doesn't like to alter her routine. Bennett shows that Doris gets aggravated by problems that would be insignificant to other people. This is because she doesn't have other matters to keep her mind off these problems such as company or hobbies. ...read more.

At one point the camera fades out and comes back with a view of her sitting on the floor after falling over. Bennett chose not to show the action of falling because it would be undignified. Also, if Bennett showed the fall, Doris might become a funny character and reduce the audience's pity for her. Yet, Doris does look helpless sitting on the floor. This is ironically the moment when Doris finds the cream cracker after she has been complaining about Zulema's poor house cleaning. One thing that Doris says that might create sympathy is, 'you've done it now Doris, you've done it now, Wilfred'. A director could tell the actor playing Doris to say the line as if she is fearful of dying and showing that she regrets turning help away. The camera then fades out as Doris has decided she will lie at the bottom of the stairs to die. ...read more.