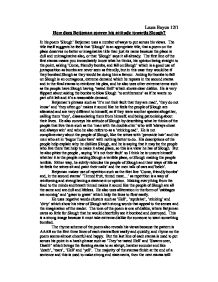 How does Betjeman convey his attitude towards Slough?

Laura Bayon 12/1 How does Betjeman convey his attitude towards Slough? In his poem 'Slough' Betjeman uses a number of ways to put across his views. The title itself suggests he feels that 'Slough' is an appropriate title, that a poem on the place deserves no better or imaginative title than just its name because the place is dull and unimaginative also, or that 'Slough' says it all already. The first line of the first stanza means you immediately know what he thinks, his opinion being straight to the point, asking 'Come, friendly bombs, and fall on Slough' which is a good use of juxtaposition as bombs are never seen as friendly, but in this case they would be if they bombed Slough as they would be doing him a favour. Asking for bombs to fall on Slough is an outrageous, extreme demand which he repeats in the second stanza and in the final stanza to reinforce his plea, and he also uses other extreme terms such as the people have Slough having 'tasted h**l' which shows clear dislike. ...read more.

Making everything from the food to the minds and breath tinned makes it sound like the people of Slough are all the same and are dull and lifeless. He also uses alliteration in the form of 'cabbages are coming' and 'grass to graze' which help the lines to flow easily. He uses negative words clusters such as 'h**l', 'repulsive', 'stinking' and 'dirty' which show his view of Slough with strong words that appeal to the senses and the imagination of the reader. The tone of the poem is one of dislike, where Betjeman cares so little for Slough that he would cheerfully see it bombed and destroyed. This is a strong image because it must take extreme dislike for someone to want something bombed. The rhyme scheme of the poem also reveals his views because the pattern is AAAB so the first three lines of each stanza flow easily and quickly, and rhyme so the poem seems almost cheerful and happy. But the last line of each stanza is used to put across his point in a harsh phrase such as 'They've tasted h**l' and 'Swarm over, Death!' ...read more.

Betjeman uses irony in his poem as he describes the 'polished oak' desk belonging to the 'man with double chin' and I think Betjeman has mentioned this because he feels that the land that was there before, has now been destroyed, with the trees all being cut down to make room for the buildings, and as if this wasn't bad enough, the trees have been used to make the desks for the people who are responsible for ruining Slough which he sees as sadly ironic. One of Betjeman's key phrases is 'It isn't fit for humans now' which is a strong statement about the state of the place but also the use of the word 'now' at the end suggests how he feels Slough was not always like this and it has slowly been ruined over the years. In this way, I think the poem is tinged with sadness as he feels it has been ruined to the point where there is no way to solve it but to destroy it which is a very emotive, strong view. I think you can sum up Betjeman's view of Slough by the line repeated at the beginning and end of the poem 'Come, friendly bombs, and fall on Slough'. ...read more.