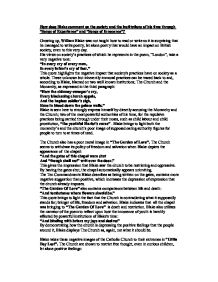 How does Blake comment on the society and the institutions of his time through Songs of Experience and Songs of Innocence?

How does Blake comment on the society and the institutions of his time through "Songs of Experience" and "Songs of Innocence"? Growing up, William Blake was not taught how to read or write so it is surprising that he managed to write poetry, let alone poetry that would have an impact on British society, even to this very day. His views on society's practices of which he represents in the poem, "London", take a very negative tone: "In every cry of every man, In every infant's cry of fear." This quote highlights the negative impact that society's practices have on society as a whole. These unknown but inherently immoral practices can be traced back to and, according to Blake, blamed on two well known institutions; The Church and the Monarchy, as expressed in the third paragraph: "How the chimney-sweeper's cry, Every blackening church appals, And the hapless soldier's sigh, Runs in blood down the palace walls." Blake is seen here to strongly express himself by directly accusing the Monarchy and the Church; two of the most powerful authorities of his time, for ...read more.

Blake takes these negative images of the Catholic Church to their extremes in "Little Boy Lost". The Church are shown to restrict free thought, even in curious children, let alone positive feelings: "The priest sat by and heard the child; In trembling zeal he seized his hair." This quote illustrates a priest, fond of his authoritve power, punishing an innocent boy for questioning his love for God. As many of Blake's poems do, "Little Boy Lost" implies that the institution is corrupt from the inside-out. The fact that "all admired his priestly care" when taking care of the child suggests to the reader that regular church- goers have been sucked into the Church's twisted ways of thinking. Even the innocent boy's own parents are upset that their own son had 'betrayed' the church: "The weeping child could not be heard, The weeping parents wept." This quote presents the fact that the parent's own salvation is much more important to them an the Catholic Church than their child's welfare. ...read more.

Blake uses 'The Tyger' as a metaphor for the upcoming Industrial Revolution; "What the hammer? What the chain? In what furnace was thy brain?" As 'The Tyger' represents the Industrial Revolution, This quote seems to question 'The Tyger's' existence and its origin. As, in Blake's era, the Industrial Revolution had only just begun and, yet, was developing quickly and fast taking over the globe, Blake uses this metaphor in order to put across his lack of understanding of where the Industry will be and what it will become in the future. To conclude, It is clear in the majority of William Blake's poetry that he sensed there was a lack of integrity in Victorian society and its institutions as well as a lack of care and confidence in the next generation. Sadly, the morals and critiques that Blake imparted in "Songs of Experience" and his reflections on how life should be in "Songs of Innocence" were not taken to heart till decades after his death, yet his poems are still read in a new light to this day. ...read more.