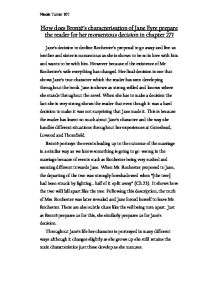 How does Bronts characterisation of Jane Eyre prepare the reader for her momentous decision in chapter 27?

How does Bront�'s characterisation of Jane Eyre prepare the reader for her momentous decision in chapter 27? Jane's decision to decline Rochester's proposal to go away and live as brother and sister is momentous as she is shown to be so in love with him and wants to be with him. However because of the existence of Mr Rochester's wife everything has changed. Her final decision is one that shows Jane's true character which the reader has seen developing throughout the book. Jane is shown as strong willed and knows where she stands throughout the novel. When she has to make a decision the fact she is very strong shows the reader that even though it was a hard decision to make it was not surprising that Jane made it. This is because the reader has learnt so much about Jane's character and the way she handles different situations throughout her experiences at Gateshead, Lowood and Thornfield. Bront� portrays the events leading up to the outcome of the marriage in a similar way as we know something is going to go wrong in the marriage because of events such as Rochester being very rushed and seeming different towards Jane. ...read more.

Jane Eyre goes through much suffering during the novel which prepares her and us for the fact something is going to go wrong with the wedding. 'her prospects were desolate' (Ch.27). This means she is not as surprised with the outcome and finds it easier to make the decision to walk away from Thornfield as she has had misery before in her life and been prepared to expect and cope with unhappy experiences through her previous experiences. For example when she was at Lowood the one friend Jane had come across (Helen Burns) died and with that she 'was no longer the same' (Ch.10). The reader can accept that Jane can cope with the misery of not being with Rochester in the same way she has coped with Helens death. Jane has high moral standards and this has a huge influence on her momentous decision. This is because she believes it is immoral to be with Rochester while he still has a wife. 'Sir, your wife is living: ... I should then be your mistress: to say otherwise is sophistical - is false.'(Ch.27) She knows that must not happen and wants to leave but it takes a lot of courage for her to accept that her morals are what she must go by in life. ...read more.

Jane is a very forgiving woman. When she was a young girl I could not say the same, however she grew and learnt to forgive but not forget 'I should have been glad to love you if you had let me' (Ch.21). When she visits Mrs Reed when she is dying she forgives her for all the misfortunes. So when Mr Rochester's wife is found out it is not surprising that she 'forgives him on the spot' (Ch.27). However her forgiving nature does not let her forget what is happening and she cannot live as a mistress. She loves Rochester and although she can forgive him for his actions all the other aspects of her character get in the way and overrule the decision. It is clear that Jane matured and grew from a frail young girl to an experienced adult. The obstacles she encountered during her stay at Gateshead, Lowood and Thornfield made her stronger both physically and emotionally. They all helped her when making the momentous decision. This also helped the audience understand and be fully prepared for what lay ahead in chapter 27 and the momentous decision that Jane was going to make, without being surprised. Charlotte Bront� used many different characteristics in Jane Eyre which influenced the decisions and actions of the portrayed character Jane. ?? ?? ?? ?? Nicole Turner 10T ...read more.