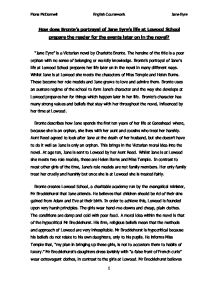 How does Bronte's portrayal of Jane Eyre's life at LowoodSchoolprepare the reader for the events later on in the novel?

How does Bronte's portrayal of Jane Eyre's life at Lowood School prepare the reader for the events later on in the novel? "Jane Eyre" is a Victorian novel by Charlotte Bronte. The heroine of the title is a poor orphan with no sense of belonging or worldly knowledge. Bronte's portrayal of Jane's life at Lowood School prepares her life later on in the novel in many different ways. Whilst Jane is at Lowood she meets the characters of Miss Temple and Helen Burns. These become her role models and Jane grows to love and admire them. Bronte uses an austere regime of the school to form Jane's character and the way she develops at Lowood prepares her for things which happen later in her life. Bronte's character has many strong values and beliefs that stay with her throughout the novel, influenced by her time at Lowood. Bronte describes how Jane spends the first ten years of her life at Gateshead where, because she is an orphan, she lives with her aunt and cousins who treat her harshly. Aunt Reed agreed to look after Jane at the death of her husband, but she doesn't have to do it well as Jane is only an orphan. This brings in the Victorian moral idea into the novel. At age ten, Jane is sent to Lowood by her Aunt Reed. ...read more.

After the urbanisation of Britain, the public interest in promoting general health increased. The physical conditions at Lowood were damp and cold, leading to an outbreak of Typhus. One of the main reasons that Jane leaves Lowood is because Miss Temple has left and Jane says "from the day she left I was no longer the same." This tells us that Miss Temple had a big impact on Jane's life. When Jane leaves Lowood after ten years there she feels that, "she has imbibed from her something of her nature and much of her habits". Jane also wants to explore a bit more of the world as she has no experience of it so far. Jane has changed greatly in her time at Lowood and she is even bold enough to put an advert in the paper for a new job as a governess. This was mainly because a governess was one of the only few respectable positions available to the educated but poverty stricken single woman in the Victorian period. At the beginning of the novel, Jane is a little girl, resentful of her aunt and cousins and Bronte uses this to show that Jane is unable to fit in. Throughout her time at Lowood Jane's character develops based mainly upon her two role models and her limited experience of life and the world around her. ...read more.

Jane remains firm in her ideas about love that she learned from Helen at Lowood. At the end of the novel, Jane hears Rochester calling for her and she leaves Moreton to search for her true love. She returns to Thornfield, only to find it burned to the ground and asks at a local inn where Mr Rochester would be. She returns to her loved one who is now blinded by the fire, and this emphasises her belief that one should be true to oneself and ignore a person's faults. Rochester and Jane then get married and enjoy spending the rest of their life together. The Victorian period was a time when a Women's role in society was restrictive and cruel. Through "Jane Eyre", Bronte attacks social discriminations such as poverty, the lack of a universal education for male and females and s****l equality and also the limited opportunities for women at the time. Charlotte Bronte creates many links between Jane's life at Lowood and her life later on in the novel. Jane bases her principles upon those similar to Helen and Miss Temple. The life she lived at Lowood stood her in good stead for what was to come and the harsh conditions and principles on which the school was founded helped Jane throughout her life. "Jane Eyre" is a Victorian novel with a melodramatic storyline that has a moral, social and historical context. ...read more.