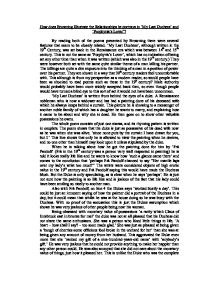 How does Browning Illustrate the Relationships he portrays in 'My Last Duchess' and 'Porphyria's Lover'? By reading both of the poems presented by Browning there were several features that seem to be closely related. 'My Last Duchess', although written in the 19th Century, was set back in the Renaissance era which was between 14th and 15th century. This is not the same as 'Porphyria's Lover', which has no indication of being set any other time than when it was written (which was also in the 19th century.) They were however both set with the same quite similar theme of a man killing his partner. The killings are quite a dire exposure into the thinking of a man in a position of power over his partner. They are shown in a way that 20th century readers feel uncomfortable with. This although is from my perspective as a modern reader, so would people have been as shocked to read poems such as these in the 19th century? Male authority would probably have been more widely accepted back then, so even though people would have turned a blind eye to this sort of act it would not have been uncommon. 'My Last Duchess' is written from behind the eyes of a duke. A Renaissance nobleman who is now a widower and has had a painting done of his deceased wife which he always keeps behind a curtain. This picture he is showing to a messenger of another noble family of which has a daughter he wants to marry, and explaining how it came to be about and why she is dead. ...read more.

This is shown on line 34 where he says 'Who'd stoop to blame this sort of trifling?' He would not be prepared to go to his wife and tell her this when (in his opinion) should be doing as he pleases anyway. Also on lines 42 and 43 'and I choose never to stoop'. This puts a solid lid on the fact that he would never go so low as to ask or tell her to behave as he sees fit. This selfishness and jealousy of the Duke to his Duchess, results in her death near the end of the poem. From line 43 'Oh sir, she smiled' to line 45 'Then all smiles stopped together' there is a build up to her death. The tension build up, she smiles at the Duke, but also in the same way to other men. This got worse and worse as she continues to do to, the Duke couldn't stand this so he 'gave commands' and she was executed. To show the Dukes backhandedness of the situation, he continues the tour of the house with the messenger after telling him the story of 'My Last Duchess' This shows that he thinks he is the hierarchy, that he is the most important and that killing a wife who did not suit his picture of the obedient woman. Both of the poems are based around a love triangle of the female, her lover and her partner/husband. Although this may be true, the poems are still quite different, because in 'Porphyria's Lover' there is a definite other partner for Porphyria, but 'My Last Duchess is written entirely on the Duke speculations of the fraternisation between his Duchess and 'other men'. ...read more.