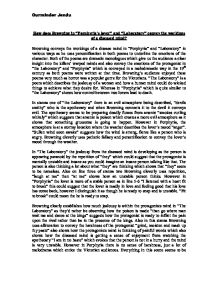 How does Browning in "Porphyria's lover" and "Laboratory" convey the workings of a diseased mind? Browning conveys the workings of a disease mind in "Porphyria" and "Laboratory" in various ways as he uses personification in both poems to underline the emotions of the character. Both of the poems are dramatic monologues which give us the audience a clear insight into the killers' warped minds and also convey the emotions of the protagonist in "the Laboratory" and "Porphyria" which is conveyed in a melodramatic way in the 19th century as both poems were written at that time. Browning's audience enjoyed these poems very much as horror was a popular genre for the Victorians. "The Laboratory" is a poem which describes the jealousy of a woman and how a human mind could do wicked things to achieve what they desire for. Whereas in "Porphyria" which is quite similar to "the Laboratory" shows how control between two lovers lead to death. In stanza one of "the Laboratory" there is an evil atmosphere being described, "devils smithy" who is the apothecary and when Browning connects it to the devil it conveys evil. The apothecary seems to be preparing deadly fumes from arsenic "smokes curling whitely" which suggests that arsenic is poison which creates a more evil atmosphere as it shows that something gruesome is going to happen. ...read more.

They want the control and are willing go take life which Browning also conveys two balances of power. Here is where the gender and a motive to the killing are made clear of the protagonist in "The laboratory". It seems that the protagonist is a woman whose lover is having an affair with two other women. These are her intended victims. 'Pauline should have just thirty minutes to live' this is with the arsenic inside of her. She wants her to suffer but the other victim to drop dead. Pauline and Elise are the intended victims. It seems the Protagonist is a jealous women as she wants to inflict this upon Elise, 'her breast and her arms and her hand should drop dead'. This evokes the conception that Elise is a beautiful woman and the protagonist is jealous of her looks. This stanza also gives an insight into the status of the protagonist as she is someone in the higher class and is able to join the likes of the king. This stanza links to Porphyria because the lover was also jealous of her second lover as Porphyria seems to be having a relationship with another man. The lover knew of this relationship and while they made love he thought of them 'sudden thought of one so pale' is referring to the other lover of Porphyria. ...read more.

Whereas in "Porphyria" her lover is in control now whereas she was in control before "I propped her head up as before" shows he is in control now. Also her lover has no remorse for her as he believes he has done what she wanted "her darling one wish could be heard". Finally the protagonist is ready for her murderous mission in "the laboratory" she also seems to be from a higher class "take off all my jewels" which coveys that people in the 19th century are from a higher class if they have jewelry. She's very optimistic as she would be "dancing at the kings" which shows that she wants to be the attraction rather that her rivals. However in "Porphyria" her lover still wants to be together with her although she is dead "we sit together now" which gives us a sense that he believes in life after death. This shows that he is still in love with her although she is dead. In conclusion Browning uses many techniques to empathize the characters emotions in many ways such as rhyming couplets which is the language of love, rhetorical questions, and a lot of alliteration. But overall I think as an audience "Porphyria" was the most effective poem as it is a melodramatic play which would attract many audiences and most importantly it keeps the reader thinking as to what is going to happen to the character. ?? ?? ?? ?? Gurminder Jandu ...read more.