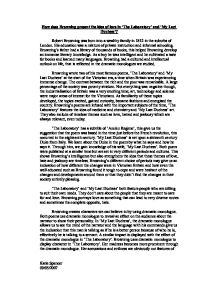 How does Browning present the idea of love in 'The Laboratory' and 'My Last Duchess'?

How does Browning present the idea of love in 'The Laboratory' and 'My Last Duchess'? Robert Browning was born into a wealthy family in 1812 in the suburbs of London. His education was a mixture of private instruction and informal schooling. Browning's father had a library of thousands of books, this helped Browning develop an immense literary knowledge. As a boy he was intelligent and he cultivated a taste for books and learned many languages. Browning had a cultured and intellectual outlook on life, that is reflected in the dramatic monologues we studied. Browning wrote two of his most famous poems, 'The Laboratory' and 'My Last Duchess' at the start of the Victorian era, a time when Britain was experiencing immense change. The contrast between the rich and the poor was remarkable. A large percentage of the society was poverty stricken. Not everything was negative though, the industrialisation of Britain was a very exciting time; art, technology and science were major areas of interest for the Victorians. As familiarity of these topics developed, the topics excited, gained curiosity, became fashions and energised the country. Browning's poems are infused with the important subjects of the time, 'The Laboratory' features the idea of medicine and chemistry and 'My Last Duchess' art. They also include of timeless themes such as love, hatred and jealousy which are always relevant, even today. 'The Laboratory' has a subtitle of 'Ancien Regime', this give us the suggestion that the poem was based in the time just before the French revolution, this occurred in the eighteenth century. 'My Last Duchess' is set upon a sixteenth century Duke from Italy. We learn about the Duke in the poem by what he says and how he says it. Through him, we gain knowledge of his wife, 'My Last Duchess'. Both poem were published at a similar time but are set in very different periods and cultures. ...read more.

This demonstrates how obsessed with himself he is. He is so insensitive that he is prepared to take the life of his wife. Indirectly, the Duke killed his wife himself, 'I gave commands', this tells me that with his high status, he organised someone else to kill his wife. He may well have done it himself. In a very Catholic renaissance Italy, the only way to get rid of his wife would be to kill her because divorce was not acceptable, 'Then all smiles stopped together'. I think that it is ironic that the Duke will order his visitors around, 'Will't you please rise?', but he would not give commands to his wife. He shows no love or empathy to his dead wife, he is arrogant and by killing he shows his true brutality and cold-hearted disregard for others. The duke's wife was essentially meant to be like an investment. The narrative suddenly changes here, the Duke jumps from talking ominously about his 'Last Duchess' to talking about how much he expects his new wife to bring into his life, 'Of mine for the dowry', 'At starting, is my object', this marriage is clearly for money and business not love. This adds to the audience's dislike of the duke because we get the idea of his bitter, callous personality. He has been unemotional to have his wife killed and is now ready to have another wife. The Duke, once again changes subject and talks about another incredibly expensive piece of art work, 'Notice Neptune', the Duke all the way through the poem has concentrated important issues that score high in his life style, money, status, possessiveness and power. By making a point of the artwork, the duke gives us the impression of his life style and accentuates several points about his personality. We get the idea of his rich life style by the way he values the artwork. ...read more.

I think she believes that while her 'dying face' and the ugliness of death stays in this man's mind, stays with him, he will see her no longer beautiful. The narrator is blinded by evil and is looking forward to another's suffering. She shows no logic or thought and is just driven by her desire for revenge. I believe it is in the eleventh and twelfth stanzas where we discover her true desperation and labours. 'My whole fortunes fee' and 'take all my jewels' show us her madness and the extreme she is willing to go to. She has given her all; all her money and jewels, everything that is of value, to get the satisfaction of witnessing the death of her rival. She goes to such great lengths that she effectively sells herself too, 'kiss me' to say thank you to the apothecary. She is so excited and eager, she is willing to sell herself to the old man s******y, 'on my mouth if you will'. She is totally thrilled with the power and potential of the poison. 'The Laboratory' finishes with a massive contrast of her intention and social status, 'I dance at the Kings!' This hints of the corruption in the highest institutions in the country. Although she has money and a high status, she is still willing to lower herself to get her own way, as if its for her own entertainment to ruin someone else's life, unlike the Duke in 'My Last Duchess' to whom, social status and appearances are everything. In both the poems, Browning approaches the idea of love in an unexpected manner. Browning explores the idea of love not as something that should make you feel good and happy, he doesn't explore the warm side of love but explores the dark side. Both characters in the poems show two situations of people that don't respect love. The narrators both kill in order to get their own way that would not be expected of a typical love poem. Katie Spencer 09/05/2007 ...read more.