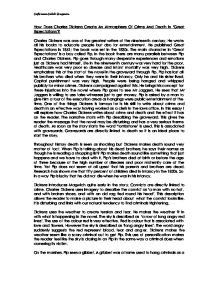 How Does Charles Dickens Create An Atmosphere Of Crime And Death In Great Expectations?

How Does Charles Dickens Create An Atmosphere Of Crime And Death In 'Great Expectations'? Charles Dickens was one of the greatest writers of the nineteenth century. He wrote all his books to educate people but also for entertainment. He published Great Expectations in 1861; the book was set in the 1830s. The main character in 'Great Expectations' is a boy called Pip. In the book there are many parallels between Pip and Charles Dickens. Pip goes through many desperate experiences and emotions just as Dickens had himself. Life in the nineteenth century was very hard for the poor. Healthcare was very poor so disease and infant mortality was very high. Dickens emphasizes this at the start of the novel in the graveyard through Pip. Pip has lost all his brothers who died when they were in their infancy. Only he and his sister lived. Capital punishment was very high. People were being hanged and whipped publicly for minor crimes. Dickens campaigned against this. He brings his concept for these injustices into the novel where Pip goes to see Mr Jaggers. He sees that Mr Jaggers is willing to use false witnesses just to get money. Pip is asked by a man to give him a tour of the execution areas as hangings were public entertainment at the time. One of the things Dickens is famous for is his skill to write about crime and death in an effective way having worked as a clerk in the laws office. In this essay I will explore how Charles Dickens writes about crime and death and the effect it has on the reader. ...read more.

Pip's guilt is making him feel like he is tied up because he stole from his family. Also coldness is something that cannot be brushed away and that can be linked to Pip's feelings because he feels as if there is no way he can get away with what he has done. The weather makes Pip feel like a convict. The wind makes Pip feel as if he has shackles on his legs. Dickens here tries to relate to the convict who is 'as the iron was riveted to the leg' of the convict. Pip's guilt is making him feel like he is tied up because he stole from his family. In chapter eight, an air of discomfort and gloom is created immediately. Pip says he feels, '...not at all at my ease' as soon as he arrives at Satis House. This only helps to make the reader feel uncomfortable. The outside of Satis House is made to look like a prison. The house has 'iron bars' which are rusty, indicating neglect. This is perhaps a warning about the neglect we will find inside the house. Many windows had been walled up just like a prison and the bricks are old as if the building would break at any minute. When Pip approaches the front door, he sees the door has 'chains' on it. This makes the reader feel as if the people inside are trapped and have perhaps committed a crime. The chains give the feeling that no one is able to get out of the house and no one can get in. ...read more.

Great Expectations was written intended for the rich. Charles Dickens didn't like the injustice of the working class and wanted things to change. He knew that only the rich could change things so he wrote Great Expectations intended for them. Great Expectations was published in monthly instalments in newspapers. Newspapers were only read by the rich because they could afford it and at the time only rich people could read. Dickens achieved a lot through his books. Soon after Great Expectations was published public hangings stopped. All through the book Pip goes to the same places as Charles Dickens. Just like his author, Pip was born in Kent in a working class family. He went to London and became rich just like Dickens. Dickens was born into the working class. His father couldn't fend for his family and ended up committing crime. His father was caught and sent to jail. Dickens shows how hard life was for the working class and how people were forced into crime in order to survive through Pip. Charles Dickens creates an atmosphere of crime and death by using many different techniques. He personifies the weather to make an atmosphere even gloomier. He is very careful about what setting he uses to fit in with what is happening in the story. Charles Dickens also uses imagery to make the reader make a picture in their head of what is going on. Overall Charles Dickens was a great writer who has changed a lot through his effective way of writing about crime and death. He changed so many things and also provided entertainment to the people of the nineteenth century. ?? ?? ?? ?? Safwaan Sakib Hussain ...read more.