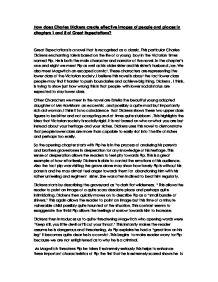 How does Charles Dickens create effective images of people and places in chapters 1 and 8 of Great Expectations?

How does Charles Dickens create effective images of people and places in chapters 1 and 8 of Great Expectations? Great Expectations is a novel that is recognised as a classic. This particular Charles Dickens enchanting tale is based on the life of a young boy in the Victorian times named Pip. He is both the main character and narrator of the novel. In the chapter's one and eight we meet Pip as well as his older sister and his sister's husband Joe. We also meet Magwitch an escaped convict. These characters are representing the lower class of the Victorian society. I believe this novel is about the fact lower class people may find it harder to push boundaries and achieve big thing. Dickens, I think, is trying to show just how wrong this is that people with lower social status are expected to stay lower class. Other Characters we meet in the novel are Estella the beautiful young adopted daughter of Mrs Havisham an eccentric, and possibly a quite mad but importantly rich old woman. I think it is no coincidence that Dickens shows these two upper class figures to be bitter and not accepting and at times quite stubborn. ...read more.

This is Dickens demonstrating his use of description to encourage emotions and reactions. The first chapter is set in a desolate church yard near the marsh land. Dickens descriptions such as "This bleak place overgrown" and "raw afternoon towards evening" contribute to the ever growing dark and oppressive atmosphere. This kind of description also help to redeem the understandably scared Pip but they almost make him seem more pathetic and helpless. If for example Dickens had decided to set the scene in a pleasant grave yard on a sunny day it would withdraw the sense of suspense amongst readers. Satis house is introduced to us in chapter 8 as well as the characters Estella and Mrs Havisham. Estella explains to Pip that Satis means enough this was because the designer of the house assumed whoever had this house would be satisfied and need nothing more. This extra information seems to contrast the first impression given to be by Pip where he is describing it as "old brick and dismal". This allows the reader to ask questions about why such a great house now appears to be in ruins. ...read more.

and that the figure upon which it hung loose, had shrunk to skin and bone" show that Satis house and Mr Havisham crumbled together. Her neglect is reflected upon the house. Charles Dickens was effective in introducing the main characters by using descriptive language to create images of them and successfully chose settings to influence the reader's emotions towards certain characters. Each character brought a new aspect to the story to enhance its grip on the reader and to make sure it engaged people from all backgrounds. My view of each character varied, young Pip who could only receive upmost sympathy in chapters 1 to 8. Magwitch caused fear and hatred, and Estella stimulates detest. Whereas Mrs Havisham almost left the reader confused as to how to feel towards her. I think this novel has historical relevance to today as many people in our country have demonstrated with hard work and ambition it is possible to make a positive reputation. For example Sir Alan Sugar is well known successful business man who has build his business empire from scrap. This Demonstrates how much more accepting society is nowadays. So it is now possible for many people to have "Great Expectations." By Jacob (Prose Study) ...read more.