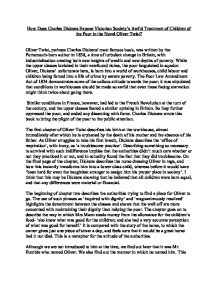 How Does Charles Dickens Expose Victorian Society's Awful Treatment of Children of the Poor in the Novel Oliver Twist?

How Does Charles Dickens Expose Victorian Society's Awful Treatment of Children of the Poor in the Novel Oliver Twist? Oliver Twist, perhaps Charles Dickens' most famous book, was written by the Portsmouth-born author in 1838, a time of turbulent change in Britain, with industrialisation creating both new heights of wealth and new depths of poverty. While the upper classes lavished in their newfound riches, the poor languished in squalor. Oliver, Dickens' unfortunate hero, is born into a world of workhouses, child labour and children being forced into a life of crime by severe poverty. The Poor Law Amendment Act of 1834 demonstrates some of the callous attitude towards the poor; it was stipulated that conditions in workhouses should be made so awful that even those facing starvation might think twice about going there. Similar conditions in France, however, had led to the French Revolution at the turn of the century, and the upper classes feared a similar uprising in Britain. So they further oppressed the poor, and ended any dissenting with force. Charles Dickens wrote this book to bring the plight of the poor to the public attention. The first chapter of Oliver Twist describes his birth at the workhouse, almost immediately after which he is orphaned by the death of his mother and the absence of his father. ...read more.

He is ironically described as 'very self-devotional' for doing what he does, which includes saying whatever the parish board wanted to hear and warning Mrs. Mann of visits by the board, so 'the children were neat and clean to behold, when they went.' From his actions in chapter three, we can tell that Bumble is actually only interested in profit from the children, for example his reaction to Oliver asking for more, and the way in which he tries to sell him as an apprentice into a life of servitude and exploitation. Mrs. Mann runs the parish orphanage, which Oliver attends until he is nine years old. She is described by Mr. Bumble as 'a humane woman, with motherly instincts' but it is shown that for the most part he is covering up her shortcomings, and the rest he is ignorant of. We are shown the woman's evil directly, in the way Oliver hides his hate of her because of her threats ('he had sense enough to make a feint of feeling great regret at going away'); and through irony, describing her as an 'experimental philosopher'; the experiments being giving the children no food. After asking for more food, Oliver is sent to work for Mr. ...read more.

It is very different to everyone we had seen up until now- it lacked the respectful deference of Oliver's speech and the 'educated' phrasing of Mr Bumble. This is perhaps to show the lack of education that children of the poor get. Jack seems to have an appealing and pleasant nature, and yet is trapped in a circle of crime by Fagin because of his poor background. This means the reader has sympathy with him despite his criminality. Nancy, another of the child criminals, was forced into prostitution at a young age because of her poverty, and was shown nothing but cruelty as a child, and yet she has developed moral standards, and regrets her part in the snatching of Oliver. This is meant to show how the poor do have morals, and that crime is often forced upon them. In the book, Oliver experienced the worst that the society of the time had to offer. He suffered cruelty, bullying and starvation. There is however, a good side to the story for, despite going through all of that he remains uncorrupted- despite being the object of injustice all his life, he recoiled in horror from enforcing it on anyone else. Also, while Oliver is rescued from the life of poverty, those who exploited him are severely punished. This book highlights the severe socio-economic problems of the time and also keeps the essential message that good will always triumph over evil. ...read more.