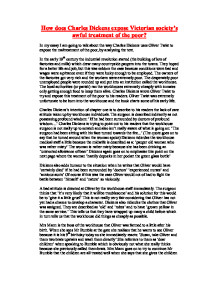 How does Charles Dickens expose Victorian society's awful treatment of the poor?

How does Charles Dickens expose Victorian society's awful treatment of the poor? In my essay I am going to talk about the way Charles Dickens uses Oliver Twist to expose the maltreatment of the poor, by analysing the text. In the early 19th century the industrial revolution started (the building of lots of factories and mills) which drew many countryside paupers into the towns. They hoped for a better life and job, but this was seldom the case because conditions were bad and wages were a pittance even if they were lucky enough to be employed. The owners of the factories got very rich and the workers were extremely poor. The desperately poor unemployed people were rounded up and put into an institution called the workhouse. The local authorities (or parish) ran the workhouses extremely cheaply with inmates only getting enough food to keep them alive. Charles Dickens wrote Oliver Twist to try and expose this treatment of the poor to his readers. Oliver Twist was extremely unfortunate to be born into the workhouse and the book charts some of his early life. Charles Dickens's intention of chapter one is to describe to his readers the lack of care attitude taken up by workhouse individuals. The surgeon is described indirectly as not possessing profound wisdom: 'If he had been surrounded by doctors of profound wisdom...' Charles Dickens is trying to point out to his readers that the workhouse surgeon is not really up to scratch and also isn't really aware of what is going on: 'The surgeon had been sitting with his face turned towards the fire...' ...read more.

An undertaker called Mr Sowerberry eventually employs Oliver. Although Oliver is probably better off at the undertakers than being sent to sea, he still gets treated badly. 'Cold bits that were put out for Trip' Oliver eats the cold pieces of meat that were put out for the dog. Charles Dickens emphasises that employers gave their apprentices the bare minimum by saying that the meat was for the dog and that the dog hasn't come back since the morning so that is the reason that Oliver even got the dog's food. When Oliver gets fed up with the abuse from Noah Claypole and Mr Sowerberry he makes a decision to run away to London. On his way he passes his old workhouse and sees his friend Dick working in the garden Charles Dickens writes: 'he raised his pale face' Dickens is dropping a hint that Dick is in a poor state of health. In the next paragraph Oliver repeats that Dick is very pale: 'How pale you are' this is exposing what the workhouse does to little children- brings them 'close to death' Dickens tries to horrify the reader on how depressed that Oliver's friend Dick is: 'I dream so much about heaven and angels... kind faces that I never see when I am awake.' Dick is only about seven or eight years old but he is talking about going to heaven whereas if he were a normal happy child he would be thinking about living. ...read more.

I think that Charles Dickens used the name 'Fang' to say a little about the judge's character. The main theme of Oliver Twist is Good v. Evil. The 'good' characters are Oliver, Mr Brownlow and Nancy (To an extent.) Nancy is represented to be a bit good and a bit evil because she is with Bill Sikes who is a robber and has a lot of dealings with Fagin. Fagin, Monks, Bill Sikes, Artful Dodger and Charley Bates are the bad characters. When Oliver first sees Fagin for the first time he is described using images of the devil: 'repulsive face' 'matted red hair.' This tells the reader something about Fagin's character even before he speaks. The Victorians were very religious people and would have picked up on that point immediately. However the first thing that Fagin is described as is 'a Jew.' The Victorians were all Christians apart from very few, and they would probably of hated Fagin because he was a Jew. Bill Sikes is described as 'dirty' and 'bulky' and is dressed in dark clothes. All of these create images of evil and of a nasty man who you would not want to cross. Charles Dickens is informing the reader further on members of Fagin's gang. Overall I think that Charles Dickens does a good job of informing his readers what went on in Victorian society. He has used a variety of methods including the themes of the book (good v. evil, nature v. nurture.) and using typical Victorian characters (Mr Bumble, Mrs Mann, Mr Gamfield ect.) ...read more.