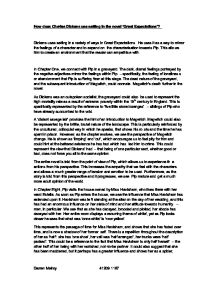 How does Charles Dickens use setting in the novel Great Expectations?

How does Charles Dickens use setting in the novel 'Great Expectations'? Dickens uses setting in a variety of ways in Great Expectations. He uses it as a way to mirror the feelings of a character and to expand on the characterisation towards Pip. This allows him to create an environment that the reader can empathise with. In Chapter One, we connect with Pip in a graveyard. The dark, dismal feelings portrayed by the negative adjectives mirror the feelings within Pip - specifically, the feeling of loneliness or abandonment that Pip is suffering from at this stage. The dead nature of the graveyard, and the subsequent introduction of Magwitch, could connate Magwitch's death further in the novel. As Dickens was an outspoken socialist, the graveyard could also be used to represent the high mortality rate as a result of extreme poverty within the 19th century in England. This is specifically represented by the reference to 'five little stone lozenges' - siblings of Pip who have already succumbed to the void. ...read more.

We see that as she has decayed, brooded and plotted, her abode has decayed with her. Her entire room displays a recurring theme of white', yet as Pip looks closer he sees that what was 'once white' is 'now yellow'. This represents the passage of time for Miss Havisham, and shows that she has faded over time, and is now a shadow of her former self. There is a repetition throughout the description of her as 'half': she has 'one shoe', her veil was 'half arranged', her trunks were 'half packed'. This could be a reference to the fact that Miss Havisham is only half herself - the other half of her being with her vanished, not-to-be partner. It could also suggest that she has been maddened, but it perhaps has a greater influence and shows her as a spider, twitching the webs of other lives to suit her purposes. This for example is shown when she allows Estella to 'practice' on Pip, encouraging her to 'break him'. ...read more.

Dickens makes a mockery of this phrase by using Wemmick as a stereotypical Englishman. His house is describes as a 'child's copy' of a castle, with compromises and illusions to aid the effect. This could show that Pip, and by extension Dickens, feels jaded and wishes to ridicule the mentality of the English people that if they ignore something and shut themselves off from it, it will cease to exist. This would be one of Dickens major concerns: as without the support of the rich - who would need to open their eyes and look at the situation - it will not be possible for the situation of the poor to change. In conclusion, there are a number of ways that Dickens uses setting in Great Expectations. It is primarily used as a way for us to empathize with the characters, which is particularly important for us because of the way in which Pip, our narrator, acts and matures as the novel progresses. However, the setting is also used to represent Dickens views on society, classes, and segregation, and he does so to great effect. ?? ?? ?? ?? Darren Melroy 41209 1167 ...read more.