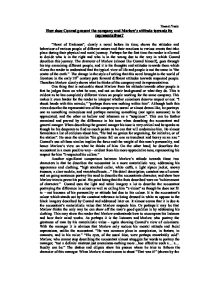 How does Conrad present the company and Marlow's attitude towards its representatives? &quot;Heart of Darkness&quot;

Naeem Yasin How does Conrad present the company and Marlow's attitude towards its representatives? "Heart of Darkness", clearly a novel before its time; shows the attitudes and behaviour of various people of different nature and their reactions to various events that take place during their physical and metal journey. Perhaps for the first time the reader is allowed to decide who is in the right and who is in the wrong due to the way in which Conrad describes this journey. The character of Marlow (almost like Conrad himself), goes through his trip examining different people, and it is his thoughts and attitudes towards them which allows the reader to understand that the typical view of life and people is not the same in "the centre of the earth." The change in the style of writing that this novel brought to the world of literature in the early 20th century puts forward different attitudes towards respected people. Therefore Marlow clearly shows what he thinks of the company and its representatives. One thing that is noticeable about Marlow from his attitude towards other people is that he judges them on what he sees, and not on their background or what they do. This is evident as he has completely different views on people working for the same company. This makes it even harder for the reader to interpret whether colonisers deserve respect or not. ...read more.

the people of the company and the company itself may seem respectable an appreciative but the deeper you look into their mind and personality the more negative character will be found. Apart from the accountant and general manager, Marlow comes across other representatives of the company. He describes what and who he sees constantly as "unreal" and a "pretence". These words are deliberately used by Conrad to portray the veneer that the colonisers have and they really have no purpose and they are full of greed - "the only real feeling was a desire to get appointed to a trading-post where ivory was to be had, so that they could earn percentages." This perhaps overall shows that Marlow does not think very well of the Company and Conrad uses this to portray the company in a negative light. Conrad uses Marlow's feelings to get his message across. Conrad's use of negative abstract "evil" and verbs such as, "intrigued, and slandered and hated," shows what Marlow thought of their personalities. It is obvious that Marlow does like to look deep into these peoples mind to try and work out what is going on. This is seen by the constant questions he asks, "Who says that?" "Why ought I know?" This question also shows that he wants find out more about himself-dwelling deeper into his own heart and mind, as well as others. ...read more.

This helps us show Marlow's view of the Company's representatives too. It seems clear that despite respecting the accountant and perhaps Kurtz too, Marlow understands the inner thoughts of the representatives of the company, and Conrad realises the bad effects of the Company on the people and the area. This is shown by the brutal imagery such as "nigger getting beaten" and blamed for starting a fire when there is no evidence to suggest it. Also Conrad never shows Marlow to show something positive that the colonisers have done for the natives or the area telling the reader what Conrad himself and Marlow think of colonisation and exploitation. As well as this Conrad tries to portray the journey of Marlow into other people's minds as well as his own. Conrad's highly imaginative imagery and dramatic language helps the reader to relate to what Marlow's view and opinions are. Conrad also uses a lot of juxtapositions throughout the novel to show the comparison between the two sects as well as some of the splits in Marlow's opinions, "flushed and insensible." He describes the colonisers as "aimless...wonderers" and it seems Marlow himself has no control over his thoughts and emotions, and he too has become "aimless". His unsurity of himself and his unstable state of mind show us his confusion. Hence, it cannot fully be decided what exactly Marlow thinks of the representatives of the Company, but it is almost clear in most places that Conrad portrays the Company in a rather negative light. ...read more.