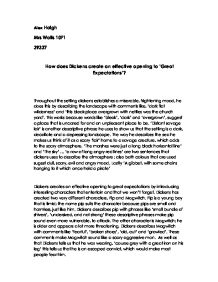 How does dickens create an effective opening to great expectations ?

Alex Haigh Mrs Walls 10F1 39337 How does Dickens create an effective opening to 'Great Expectations'? Throughout the setting dickens establishes a miserable, frightening mood, he does this by describing the landscape with comments like, 'dark flat wilderness' and 'this bleak place overgrown with nettles was the church yard'. This works because words like 'bleak', 'dark' and 'overgrown', suggest a place that is uncared for and an unpleasant place to be. 'Distant savage lair' is another descriptive phrase he uses to show us that the setting is a dark, decollate and a depressing landscape. The way he describes the sea he makes us think of it as a scary 'lair' home to a savage creature, which adds to the scary atmosphere. 'The marshes were just a long black horizontal line' and 'The sky' ... 'a row of long angry red lines' are two sentences that dickens uses to describe the atmosphere ; also both colours that are used sugest dull, scary, evil and angry mood. Lastly 'A gibbet, with some chains hanging to it which once held a pirate' Dickens creates an effective opening to great expectations by introducing interesting characters that entertain and that we won't forget. ...read more.

Pip is the complete opposite to Magwitch; this comes through in the way that he speaks and his mannerisms. When Magwitch threatens to 'cut his throat' he still remains polite by calling Magwitch 'sir' even though he does not know if he is going to kill him or not. As well as then, when Magwitch tilts him backwards over the gravestone he still uses Standard English and is polite, this shows us that in the Victorian day children were expected to be polite to any adult. Not only his accent but he also has to repeat himself such as when he says 'pip, sir. Pip. Pip, sir' this suggest that he is very quiet, probably because of how scared he is of Magwitch. Magwitch is a bully in the way that he treats pip. Magwitch 'turned me upside down, and emptied my pockets,' this would terrify pip even more because it shows that Magwitch is a lot stronger than him. Pip doesn't stand up to Magwitch, and he is very scared when he grabs him. ...read more.

Once Magwitch moves away from Pip, there is lots of evidence to show that Dickens wants us to feel some sympathy for him such as when he says, 'He hugged his shuddering body in both his arms clasping himself- as if to hold himself together' when dickens says this it makes us feel a bit sorry for Magwitch, even if he is a criminal he still must be cold, lonely and upset. As he picks his way over the graveyard, to Pip, he looks like he was trying to escape- 'the hands of the dead people, stretching up cautiously out of their graves, to get a twist upon hi ankle and pull him in.' The image that this would set in the readers head would be frightening, so we immediately feel like Magwitch is the victim instead of the criminal. 'He came to the Low Church wall, he got over it, like a man whose legs were numbed and stiff.' This tells us that physically Magwitch is not in very good condition, which also makes the reader feel sorry for him because it is as if he is not cared for and that nobody wants to look after him. ?? ?? ?? ?? ...read more.