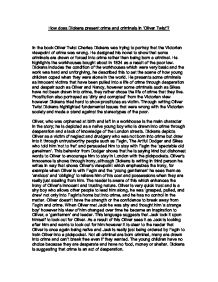 How does Dickens represent crime and criminals in Oliver Twist

How does Dickens present crime and criminals in 'Oliver Twist'? In the book Oliver Twist Charles Dickens was trying to portray that the Victorian viewpoint of crime was wrong. He designed his novel to show that some criminals are drawn or forced into crime rather than being born a criminal. He highlights the workhouses bought about in 1834 as a result of the poor law. Dickens includes the condition of the workhouses which were very basic and the work was hard and unforgiving, he described this to set the scene of how young children coped when they were alone in the world. He presents some criminals as innocent victims that have been pulled into a life of crime through desperation and despair such as Oliver and Nancy, however some criminals such as Sikes have not been drawn into crime, they rather chose the life of crime that they live. Prostitution also portrayed as 'dirty and corrupted' from the Victorian view however Dickens tried hard to show prostitutes as victim. Through writing Oliver Twist Dickens highlighted fundamental issues that were wrong with the Victorian society and made a stand against the stereotypes of the poor. Oliver, who was orphaned at birth and left in a workhouse is the main character in the story; he is depicted as a na�ve young boy who is drawn into crime through desperation and a lack of knowledge of the London streets. ...read more.

Nancy is a prostitute in the novel however Dickens portrays her as a victim rather than the Victorian view as a corrupted and dirty prostitute however it is clear to the reader she is a Godly woman who has a conscience and acts upon it. Nancy is clearly a woman who believes in God as she says phrases such as "so help me God" when she is betraying Sikes and Fagin to Rose Maylie. To the reader it shows that Nancy has morals and is able to sometimes pull away from her trapped life as a prostitute. Nancy is aware that she is a branded criminal who people 'shrink openly from' but she still has a dream of throwing her cares away and live a life much like Rose Maylie's. In this sense she is very na�ve as it seems impossible for someone to just break free of the crime in London however she tries to nurture the childish dream of running away and starting a new life. When Nancy is talking to Rose she admits that she is a criminal and that the 'poorest women fall back' but she feels older than she really is and is unable to breakaway from being a criminal. When Bill found out that Nancy had betrayed them Bill was very violent, Nancy pleaded with him to 'spare my life, for the love of heaven, as I spared yours'. ...read more.

Fagin is depicted as the devil of the novel, Dickens goes along with the Victorian view of a Jew and sculpts Fagin around it. He is trying to show that although most criminals shouldn't fit into the stereotype some do and people should be wary of them. Bill Sikes is portrayed as the real villain in Oliver Twist, he is a thuggish criminal who is violent and often takes advantage of others, and he chooses his life of crime and enjoys it. Like Fagin, Sikes is shows as an animal or something that is evil and corrupted. Sikes is often described with a 'heaving chest' and 'savage resolution'. This shows characteristics of an animal with a savage nature, the language indicates that Dickens is trying to show the fact that Bill is not only a criminal he is a mean criminal who has no compassion or thoughts for anyone. In comparison he thinks about himself a lot, and concentrates on not getting caught rather than what he is actually doing. When Sikes is murdering Nancy, Dickens uses vocabulary such as dragged, hurled, and struggled; these words imply anger and brutality. Sikes uses his violence to take control of people and this amplifies the Victorian view of a criminal. In Sikes character Dickens is trying to suggest that there are some vicious and dangerous criminal in London that people should be wary of. Sikes is a leader of the criminal underworld and is helping to trap innocent and na�ve young boys. ...read more.

Useful points are made in this essay concerning Dickens' presentation of criminals in "Oliver Twist". However, there is little obvious development or direction in the analysis and no conclusion.

Paragraph control is quite well managed but sentence construction is frequently faulty, with errors in punctuation. Lexis is adequate for the task.