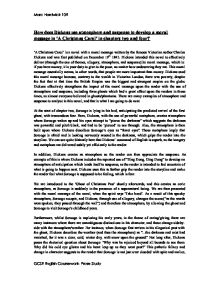 How does Dickens use atmosphere and suspense to convey his moral message in 'A Christmas carol'.

How does Dickens use atmosphere and suspense to develop a moral message in 'A Christmas Carol' in chapters two and four? 'A Christmas Carol' is a novel with a moral message written by the famous Victorian author Charles Dickens and was first published on December 19th 1843. Dickens intended this novel to effectively deliver (through the use of themes, allegory, atmosphere, and suspense) its moral message, which is: if you have money, it is your duty to give to the poor, no matter how undeserving they are. This moral message essentially means, in other words, that people are more important than money. Dickens used this moral message because, contrary to the wealth in Victorian London, there was poverty, despite the fact that at that time the British Empire was the biggest and strongest empire on the globe. Dickens effectively strengthens the impact of the moral message upon the reader with the use of atmosphere and suspense, including three ghosts which had a great effect upon the readers in those times, as almost everyone believed in ghosts/phantoms. There are many examples of atmosphere and suspense to analyse in this novel, and that is what I am going to do next. ...read more.

warehouse where he was apprenticed. Whilst Dickens is describing the Christmas event as happy and ecstatic, this develops a powerful atmosphere by numerous significant ways. For example, whilst the event is happening, he repeats over and over again: "In came...in came...in came... in came," to describe the entry of the guests at Fezziwig's event, and Dickens uses this to develop an atmosphere and a theme of joyfulness and togetherness, and that consequently shows, due to Dickens' recurring technique, that the intended effect on the reader is to make him/her feel happy. This suggests that nearly everyone was keen to be celebrating Christmas together by all appearing one by one at this event. He is intending the reader therefore to feel part of the happy occasion, and this is emphasized by the fact that lots of people are coming, which essentially suggests that everyone is welcome. This conveys richly with the spirit and meaning of Christmas that Dickens is attempting to put forward in his moral message, through the use of this atmosphere. He is expressing that Christmas time is a time for sharing and spending time with your family and friends, which is reflected in Scrooge's youth, but contrasts with Scrooge's life at present. ...read more.

In conclusion, it would be fair and accurate to say that this novel was written solely for the purpose of getting the people of Victorian Britain to change their attitudes towards the 'deserving' and the 'undeserving poor', through the use of haunting and ghosts. It was intended to deliver its moral message through the use of atmosphere and suspense, and to convey this message through varying themes. On the whole I have thoroughly enjoyed reading this novel, especially chapter two whilst looking through Scrooge's past, as it reveals a lot of what his true inner personality is, regardless of what his spiteful character is described as in chapter one. I also like this novel as it has a fitting end regarding the moral message, which is, in this case, we all have the possibility to change our personality for the good. My opinion is that Dickens without a doubt achieves all his intentions with the successful use of the Ghosts of Christmas Past, Present, and Yet to Come being the key in Scrooge's characterisation and Dickens' utter proficiency in the art of the English language enables us to depict his novel as a fine one. And, as for Scrooge's journey, it is a lesson to be learnt from by all of us, in any era. ?? ?? ?? ?? Marc Hardwick 10R GCSE English Coursework- Prose Study ...read more.