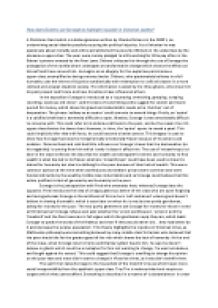 How does Dickens use Scrooge to highlight injustice in Victorian society?

Transfer-Encoding: chunked ﻿How does Dickens use Scrooge to highlight injustice in Victorian society? A Christmas Carol which is a bildungsroman written by Charles Dickens in the 1800?s, an undermining social diatribe possibly accusing the political injustice. As a Unitarian he was passionate about morality and ethics and abhorred the poverty inflicted on the underclass by the obnoxious upper-class. The poor were merely pledged to a life working for little pay often in the Debtor?s prisons enacted by the Poor Laws. Dickens critiques this through the use of Scrooge the protagonist of the novella whom undergoes a transformative change which shows the effects on himself and those around him. He begins as an allegory for the exploitive parsimonious upper-class, exemplified as being a money lender. Dickens, who passionately believes in a full humanity uses the theme of injustice symbiotically with redemption to unify all classes in a more civilised and utopian idealistic society. His reformation is aided by the three ghosts, who show him his past present and future and how his actions have influenced others. In the exposition Scrooge is introduced as a ?squeezing, wrenching, grasping, scraping, clutching, covetous old sinner?, and this lexis of constricting verbs suggest his violent and manic pursuit for money, which shows his greed and materialistic needs as he ?clutches? out of desperation. ...read more.

The two portly gentlemen ask Scrooge for money for those in need at Christmas but Scrooge refuses and asks whether the ?union workhouses?, ?prisons? and the ?treadmill? and the Poor Laws are in full vigour which the gentlemen reply they are, which leads Scrooge to speak the words of the Malthus and that ?if they would rather die?.they had better do it and decrease the surplus population?. This theory highlights the injustice in Victorian times, as Malthusian philosophy was something believed by many middle class Victorians who believed that the poor should die for the greater good of the rich which shows the lack of humanity. At the end of the stave, when Scrooge returns home and Marley?s ghost haunts him, he says he doesn?t believe in ghosts which could be a metaphor for him not wanting to change, ?he was incredulous, and fought against his senses?. This could suggest that Scrooge is unwilling to change his opinion on the poor laws and most didn?t want to change in Victorian times, as it wouldn?t benefit them. The spirit then takes Scrooge to the household of the Cratchit?s house which bears more social irresponsibility from the apathetic upper-class. ...read more.

The symbolic children disclosed by the ghost of Christmas present ?ignorance and want? relate to social injustice because they provide scrooge the epiphany that it is his actions that manifest the conditions of the poor. The children are capitalised abstract concepts that personify the plight of those who suffer deprivation. The child personifying ?want? arises from the desperation that is induced from abandonment. Likewise, ?ignorance? is inflicted from lack of education. Dickens, whom recognises this harsh cycle used the dialogue ?Doom, unless erased from his head? suggests that children of the Elizabethan plight are all heading in the same direction; becoming ?wolfish? and ?meagre? meaning that they will likely steal as a result. The word ?wolfish? suggests that they will go to all ends to forage for food, and materialistic goods. Most children became pickpockets, and stole from food stores for their family, because they simply could not afford these goods. Dickens suggests that it is not the fault of the poor that they have to take these measures, but the fault of the aristocrats whom need to ?erase? the ?Doom? which they impose. The word ?Doom? is also capitalised to suggest that it is not something to be appeased through ignoring the problem, but is much greater than the rich acknowledge. ...read more.