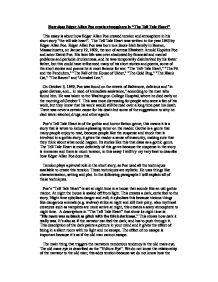 How does Edgar Allan Poe create atmosphere in "The Tell Tale Heart" This essay is about how Edgar Allan Poe created tension and atmosphere in his short story "the tell tale heart". The Tell Tale Heart was written in the year 1843 by Edgar Allan Poe. Edgar Allan Poe was born to a Scots-Irish family in Boston, Massachusetts, on January 19, 1809, the son of actress Elizabeth Arnold Hopkins Poe and actor David Poe. His later life was over-shadowed by financial and mental problems and periodic drunkenness, and he was temporarily disinherited by his foster father, but this could have influenced many of his short stories and poems, some of the short stories and poems he is most famous for are: "The Tell-Tale Heart," "The Pit and the Pendulum," "The Fall of the House of Usher," "The Gold Bug," "The Black Cat," "The Raven" and "Annabel Lee.". On October 3, 1849, Poe was found on the streets of Baltimore, delirious and "in great distress, and... in need of immediate assistance," according to the man who found him. He was taken to the Washington College Hospital, where he died early on the morning of October 7. This was most distressing for people who were a fan of his work, but they knew that his work would still be read over a long time past his death. There was never a certain cause for his death but some of the suggestions to why he died were: alcohol, drugs, and other agents. Poe's Tell Tale Heart is of the gothic and horror fiction genre; this means it is a story that is wrote to induce a pleasing terror on the reader. ...read more.

The narrator's language show his confidence and audacity, even pride, in his kill: "Never before that night had I felt the extent of my own powers - of my sagacity. I could scarcely contain my feelings of triumph". The narrator's assurance in his dark deed continued even when the police came to check on the old man and investigate the loud noises neighbours heard the night; "I smiled,-for what had I to fear? I bade the gentlemen welcome". He is very polite and confident. He is also very persuading, it's almost as if he is sound of mind. He manages to persuade the men that the old man is somewhere else in the country. He invited them around and even showed them his treasures to show that nothing had been disturbed. He even had the audacity to get some chairs and tell the men to rest in the old mans chamber whilst the whole time the old man was dismembered beneath the floor boards. However, the narrator's mind is quickly consumed with guilt, which creates his delusion of hearing the old man's heartbeat taunting him from under the flooring. His paranoia makes the heart beat "louder - louder - louder!" and in his state of delirium he confesses to killing the old man in hopes of ridding his life of the menacing heartbeat: "I felt that I must scream or die!". His guilt reached his imagination which then went on to make him hear things that wasn't real, his conscience was putting an image into his head that this old man who he had no quarrel with was going to haunt him because he killed the man for no justifiable reason. ...read more.

It adds a lot of tension, because we want to know what happens and we are waiting to fid out. Finally I will conclude with if I think the story was effective or not. I have described in the essay numerous techniques to why it is effective. I must say that I agree with all of them. I think the plot is engrossing and it really hooks you and you want to know what happens. The characterisation is excellent and the mystery of the s*x of the narrator (who I have referred to as a he) adds tension because it's hard to think of a woman committing such an act, but it is possible because the narrator confessed to loving the old man. The old mans eye, it is possible to picture it and I find it chilling to think about, but I find it even more chilling to think that someone would kill over it. The setting is marvellous, an old house, sealed off from all light, its chilling and scary making me feel lucky to live where I do, in the light. I also think that all the punctuation that Edgar Allen Poe used was used at an appropriate time and was an asset to the piece as a whole. The punctuation shows how clever the killer is and how cunning and sinister he is. But it also shows how panicked he can get. The start of the piece was also very good, because it began in the end, when he is where I can only assume, a mental institution. Where he is telling his story. In all it is a very good and very effective piece of writing. ?? ?? ?? ?? ...read more.