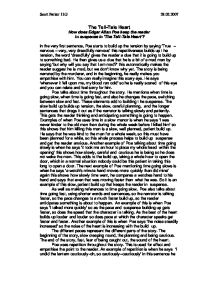 The Tell-Tale Heart How does Edgar Allan Poe keep the reader in suspense in 'The Tell-Tale Heart'? in the very first sentence, Poe starts to build up the tension by saying 'True - nervous - very, very dreadfully nervous' this repetitiveness builds up the tension, the word 'dreadfully' gives the reader a clue that it is going to build up to something bad. He then gives us a clue that he is a bit of a mad man by saying 'but why will you say that I am mad?' this automatically makes the reader suggest he is mad, but we don't know why yet. The story is being narrated by the murderer, and in the beginning, he really makes you empathise with him. You can really imagine this scary eye. He says 'whenever it fell upon me, my blood ran cold' so he is really scared of this eye and you can relate and feel sorry for him. Poe talks about time throughout the story. He mentions when time is going slow, when time is going fast, and also he changes the pace, switching between slow and fast. These elements add to building the suspense. The slow build up builds up tension, the slow, careful planning, and the longer sentences that drags it out as if the narrator is talking slowly and patiently. ...read more.

So this gives a better effect than if Poe had of just said 'very slowly'. The repetition makes it sound as if he had done it even slower. Throughout the story Poe uses noises to create atmosphere in the story. Sounds create an atmosphere as they have an effect on the reader, and noises can really set the scene in the story. Or in some cases I can add to the suspense and scare readers as they can relate to these noises that may have happened in their own home and scared them. An example of Poe using noise to create a tense atmosphere is when he says 'hinges creaked' this makes the read tense and keeps them in suspense as they are wondering what would be the old mans reaction if he heard this as he cannot see anybody so he is bound to be scared. Also when it says the hinge creeks, it gives you the impression that it is a creepy, old house, which adds to the atmosphere. The next example of sound being used to create atmosphere is when Poe says 'it was the beating of the old man's heart' so this really helps the reader picture the scene, it gives them I more imaginative view of what's happening. This noise really lets the reader know just really how scared the old man is, because they will know fro, their own experience that your heart races and becomes loud when you're scared. ...read more.

so he keeps referring to the reader as 'you', and asking the reader questions. This really involves the reader with the story, so again the reader is emotionally involved and really feels the suspense and tension built throughout the story. This is good and very effective as it allows Poe to talk of the murder in plenty of detail, and it also lets us know what the murderer is thinking and what his motive is for killing the man (the eye). The murderers feelings in this story is a vital factor as it lets us know how he has planned the murder, and also all the precautions he took leading up to the murder. It also allows Poe to describe the eye and get the reader to empathise with the murderer. I really enjoyed this story as I felt myself gripped and involved in it. So I could really feel the tension and the suspense, I was on the edge waiting for something to happen. I could really relate to the story and that's why I felt involved, because I could imagine this poor old man scared in bed and hearing strange noises, which scares anybody if they are in bed all alone. So the story was really exciting and enjoyable to read. ?? ?? ?? ?? Scott Parker 11G 28.02.2007 ...read more.