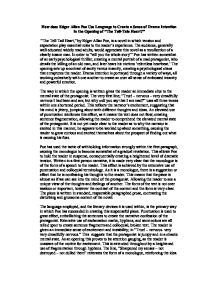 How does Edger Allan Poe Use Language to Create a Sense of Drama Intention in the Opening of &quot;The Tell-Tale Heart?&quot;

How does Edger Allan Poe Use Language to Create a Sense of Drama Intention in the Opening of "The Tell-Tale Heart?" "The Tell Tail Heart," by Edger Allan Poe, is a novel in which tension and expectation play essential roles to the reader's experience. The audience, generally well educated widely read adults, would appreciate this novel as a recollection of a clearly insane man. In order to "tell you the whole story"' Poe has written somewhat of an early psychological thriller, creating a mental portrait of a mad protagonist, who details the killing of an old man, and later hears his victims 'relentless heartbeat.' The opening sets up a contrast of sanity versus insanity, creating a psychological chaos that enraptures the reader. Drama intention is portrayed through a variety of ways, all working cohesively with one another to create an over all sense of embossed insanity and powerful emotion. The way in which the opening is written gives the reader an immediate clue to the mental state of the protagonist. The very first line; "True! - nervous - very dreadfully nervous I had been and am; but why will you say that I am mad?" uses all three tenses within one shortened period. This reflects the narrator's excitement, suggesting that his mind is jittery, jumping about with different thoughts and ideas. An elevated use of punctuation reinforces this effect, as it means the text does not flow, creating sentence fragmentation, allowing the reader to comprehend the elevated mental state of the protagonist. ...read more.

Hints of confession to the audience are found, intertwined with the use of direct address, with colloquial terms such as "Ha!" and the use of rhetorical questions, for example "why will you say that I am mad?" Poe has used these devices to thoroughly involve the audience within the piece. The result of this is that the reader is manipulated to feel like part of the story and therefore feel the tension created at a greater effect. Poe has employed various forms of imagery within the piece. He describes that the "hinges creaked" on the old wooden door. This is a little clich�d however acts very successfully in creating a picture within the mind of the reader. This is done by almost sub-consciously relating back to children's stories, where an old creaking door would make the entrance to a spooky castle in which an evil witch lived. This very definite image of the eerie or spooky, reinforces that the novel is somewhat of a refined horror. Creaking doors are often used to create a dramatic atmosphere, and Poe has clearly played on this link and used it to his advantage to create a scary situation for the reader. Animal imagery, coupled with an extended metaphor is also used to great effect. It is suggested that the old man that is to be killed is in possession of an "evil eye." This eye becomes the protagonist's excuse for killing the man, and so it is capitalised upon as a reason. ...read more.

By this statement Poe has grouped the reader with the rest of the characters within the novel, suggesting they are a collective of people who doubt his sanity. This is in fact true as the protagonist is clearly insane. Syntax plays a key role in the way in which this novel is read. It is clearly set, and easily recognisable throughout the text, varying in both tempo and patterning. Definite patterns in language are used; "I heard all things in the heaven and in the earth. I heard many things in h**l." creating a very obvious rhythm in which the words are read, also further enforcing the very bleak and ruthless appearance to his actions. "The Tell-Tale Heart," a horror story of crime and murder, can easily be recognised as a heavily dramatic novel. Poe, In consequence to the timing in which it was written, has created a strongly macabre piece, that in its day was probably very horrific and shocking. The way in which society has adapted to accept more and more gruesome revelations means that this tale may not be so shocking to the modern day reader, but was quite a feat in its time. It is however, still evident that the novel, in particular the opening, contains many devices employed in conjunction with one another to create a sense of drama intention. This is used to great effect, causing the reader to appreciate the dramatics of the novel, whilst becoming deeply involved with the plot. ...read more.