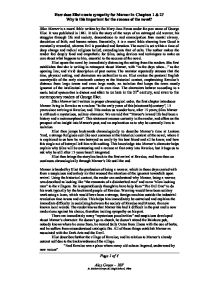 How does Eliot create sympathy for Marner in chapters 1 &amp; 2? Why is this important for the success of the novel?

Silas Marner is a moral fable written by the Mary-Ann Evans under the pen name of George Eliot. It was published in 1861. It tells the story of the ways of an estranged old weaver, his struggles through life and society, descendence to and emancipation from mental slavery, desolation of faith, and human nature. Essentially, it is a moral fable showing how Good is eventually rewarded, whereas Evil is punished and forsaken. The novel is set within a time of deep change and radical religious belief; extending into that of cults. The author makes the reader feel deeply fond and empathetic for Silas, using devices and techniques to make us care about what happens to him, essential to the success of the novel. Eliot opens the novel by immediately distancing the setting from the readers. She first establishes that she is writing in retrospect about Marner, with "in the days when..." as the opening line; and vivid description of past norms. The narrator repeatedly stresses that the time, physical setting, and characters are unfamiliar to us. Eliot evokes the pastoral English countryside of the early nineteenth century as the historical context, emphasising Raveloe's distance from large towns and even large roads, an isolation that keeps the town mostly ignorant of the intellectual currents of its own time. The characters behave according to a rustic belief system that is distant and alien to us here in the 21st century, and even to the contemporary readers of George Eliot. Silas Marner isn't written in proper chronological order, the first chapter introduces Marner living in Raveloe as a recluse "In the early years of this [nineteenth] century", 15 years since arriving at Raveloe, and. This makes us wonder how, after 15 years; Silas Marner is still such a mysterious, solitary character. We are told that "Marner's inward life had been a history and a metamorphosis". This statement arouses curiosity in the reader, and offers us the prospect of an insight into Marner's past, and an explanation as to why he currently lives in isolation. ...read more.

insect" and he lived his life "unremittingly, never asking himself why," so that he could sit "weaving - looking towards the end of his web, till he forgot the riddle [of life] and everything else but his immediate sensations.". Weaving and what it brought to him was an escape from having to live; so it became what he based his life around in Raveloe, at great foreshadowed expense. The cataleptic fits that Marner suffers from are greatly misunderstood due to lack of medical knowledge, and they are seen as something attributed with the Devil. Jem Rodney, one of the regulars at the Rainbow, finds Marner during a fit, and described his eyes as being "set like a dead man's". Even to Eliot's contemporaries, these fits would have been looked upon with great suspicion, perhaps even being seen as "visitations" of God knows what. In Lantern Yard they were generally accepted, revered even, but his fits were used against him by his betrayer, William Dane, who claimed that "this trance looked more like a visitation of Satan than a proof of divine favour". In knowledge that Marner has never claimed his fits be attributed with any form of visitation, divine or otherwise, as well as he has no control over these fits the audience is provoked into further sympathy. Dane persuades the rest of the cult that not only Marner is a thief, but also that is he is a religious undesirable. We today are further provoked to sympathy because we are more aware of the nature of fits. Marner also has knowledge of herbs, and manages to treat Sally Oates and relieve the symptoms of a heart disease, and due to lack of medical knowledge and awareness, this is seen with tight suspicion: "The occult character of the process was evident" Again this is another attribute of Marner's to help liken his character to that of the Devil. ...read more.

If Eliot had not grasped the care of the reader and the sympathy for Marner therein, then the moral of the novel would have worked nowhere near as effectively. The contemporary reader, and certainly me, would perhaps find the novel even more sympathy-evoking than a reader at the contemporary time of the book's publishing. This lies in the fact that the book touches on subjects that today we have proper understanding of, the best example being medicine. When Marner is misunderstood about with his fits, and accused of "occult", the modern reader knows that many medicines are derived from plants, and knows the effects of cataleptic fits and their involuntary nature. Also, modern society today is much less religiously conservative, and not as riddled with superstitions and assumed beliefs. He is a much more misunderstood character to the contemporary. Silas Marner is a very British piece of literature. It is distinguishable such as it typically touches on the themes of class and place within society, issues which have plagued the British Isles as long as literature - perhaps hitting a crescendo in the Victorian era. It echoes other themed pieces of literature of the time, consistently dealing with 'one's place'. More importantly, Marner was discriminated against due to his appearance; a problem rife in civil society everywhere today. Stereotyping and typically 'reading a book by its cover' are common elements of prejudice present now. Prejudice against people's appearance is probably a bigger problem now than it was in the 19th century, due to the severity of r****m and the focus on people's weight. Silas Marner echoes the isolation that some people face within society nowadays, and is easy for us to understand. Silas Marner holds relevance for us even today. ?? ?? ?? ?? How does Eliot create sympathy for Marner in Chapters 1 & 2? Why is this important for the success of the novel? Page 1 of 4 Alex Green - 10F St. Richard Gwyn RC High School, Flint ...read more.