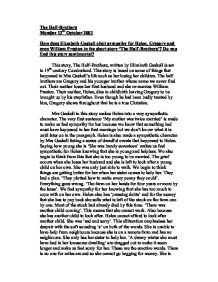 How does Elizabeth Gaskell elicit sympathy for Helen, Gregory and even William Preston in the short story 'The Half-Brothers'? Do you find this story sentimental?

The Half-Brothers Monday 13th October 2003 How does Elizabeth Gaskell elicit sympathy for Helen, Gregory and even William Preston in the short story 'The Half-Brothers'? Do you find this story sentimental? This story, The Half-Brothers, written by Elizabeth Gaskell is set in 19th century Cumberland. This story is based on some of things that happened in Mrs Gaskell's life such as her losing her children. The half brothers are Gregory and his younger brother whose name we never find out. Their mother loses her first husband and she re-marries William Preston. Their mother, Helen, dies in childbirth leaving Gregory to be brought up by his stepfather. Even though he had been badly treated by him, Gregory shows throughout that he is a true Christian. Mrs Gaskell in this story makes Helen into a very sympathetic character. The very first sentence 'My mother was twice married' is made to make us feel sympathy for her because we know that something bad must have happened in her first marriage but we don't know what it is until later on in the paragraph. Helen is also made a sympathetic character by Mrs Gaskell listing a series of dreadful events that happened to Helen. ...read more.

This makes it emotional because of the way the three of them are laid together, like Helen does not want to leave them yet she knows she has no choice. A pun is used to describe the gaze that Helen gave to the half brothers. It is described as 'a grave sort of kindliness'. When gazing at the two half brothers, she looked up and gave her first smile to William Preston. When the story arrives at Helen's actual death, the sentence that is used to say that she was dead is very short and abrupt. 'In an hour she was dead'. The words in the sentence are all one syllable long this makes it emphatic and final. Gregory is the first half brother. He also has sympathy made for him in the story. From the time he was born, sympathy was created for him. Gregory's mum, Helen, became helpless and married William Preston. Helen then had another child and died shortly after she gave birth. Gregory was blamed for his mother's death even though he had nothing to do with it. He became an 'orphan'. He had none of his own family left. Gregory was left to look after his half brother. ...read more.

'His hair had gone white'. William Prestons last request made us feel sentimental towards him. 'God forgive me and my hardness of my heart towards the fatherless child'. From this we know that he really is sorry for the way he treated Gregory. This story is sentimental. Many parts of the story are sentimental. One that makes the story particularly sentimental is the amount of deaths. At the beginning, Helens first husband dies, then Helens baby daughter, next was Helen and then lastly Gregory. This makes four deaths, which is enough for anyone to cope with in such a short space of time. Another sentimental point is all the things that happened to Helen, such as her losing most of her family and becoming helpless. Sentimentality is formed from William Preston's last request. We know that he really is deeply sorry for the way he treated Gregory. The description of Gregory's body when he dies is very easy to make a picture in your head because it is described so detailed. I don't think the story is over-emotional or exaggerated. It is written very well and the sentimental parts of the story are brought out and expressed well. Sentimental means that something is dear to you and that it means something to you. The things that happen to Helen in the story are very closely related to things that happened in Mrs Gaskell's life and therefore are sentimental to her. ...read more.