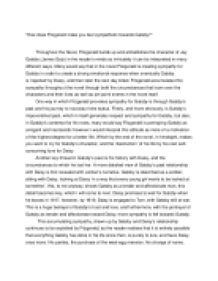 How does Fitzgerald make you feel sympathetic towards Gatsby?

﻿?How does Fitzgerald make you feel sympathetic towards Gatsby?? Throughout the Novel, Fitzgerald builds up and embellishes the character of Jay Gatsby (James Gatz) in the reader?s minds so intricately it can be interpreted in many different ways. Many would say that in the novel Fitzgerald is creating sympathy for Gatsby in order to create a strong emotional response when eventually Gatsby is ?rejected? by Daisy, and then later the next day killed. Fitzgerald accumulates this sympathy throughout the novel through both the circumstances that loom over the characters and their lives as well as pin-point events in the novel itself. One way in which Fitzgerald provokes sympathy for Gatsby is through Gatsby?s past and his journey to nouveau-riche status. Firstly, and more obviously, is Gatsby?s impoverished past, which in itself generates respect and sympathy for Gatsby, but also, in Gatsby?s contempt for his roots, many would say Fitzgerald is portraying Gatsby as arrogant and narcissistic however i would interpret this attitude as more of a motivation of the highest degree for a better life. ...read more.

It nears obsession, which I?m sure some may find pathetic but i imagine the majority of readers find this motivation and self-consuming love for Daisy endearing as well as tragic. What becomes even more tragic about this is that his expectations surpass the reality of Daisy?s life, the awkwardness of Tom and Pammy?s presence her aversion to Gatby?s self-manifested lifestyle and his parties with which he intended to impress her, hence, in reality Gatsby fails to impress Daisy with much that he has done for her. Gatsby?s yearning for Daisy (The Green Light) is mentioned in the novel by Nick?s narrative, he says ?Gatsby believed in the green light, the orgastic future that year by year recedes before us...?. This naivety which runs throughout the novel creates a lot of compassion towards Gatsby. As well as these more generally applied vehicles of sympathy, there are many more pin-point events which when viewed accumulatively, generate a significant amount of sympathy. ...read more.

Furthermore, the action of him knocking the clock over is awkward in itself. With this episode, the extravagant character of Gatsby is toppled to reveal his tenderness once more in the present form rather than through narratives of the past, furthermore, the failure of the events which Gatsby had been planning ever since he lost Daisy to Gatsby generates a huge amount of sympathy for Gatsby and the realisation that the reality of the circumstances in which he is reintroduced to daisy does not live up to his dreams, and after everything that Gatsby has done to make these dreams manifest, the reader cannot help but sympathise with Gatsby. Overall, Fitzgerald, through narrating Gatsby?s tragic past, as well as presenting Gatsby in tragic or awkward circumstances in the present, manages to build a strong idea of the character of Gatsby in the reader?s mind, so strong in fact that at times the reader can empathise as well as sympathise with Gatsby. ...read more.