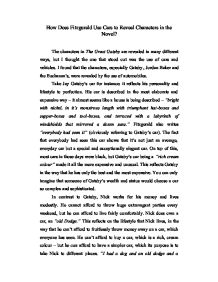 The characters in The Great Gatsby are revealed in many different ways, but I thought the one that stood out was the use of cars and vehicles. I found that the characters, especially Gatsby, Jordan Baker and the Buchanan’s, were revealed by the use of automobiles.

Take Jay Gatsby’s car for instance: it reflects his personality and lifestyle to perfection. His car is described in the most elaborate and expensive way – it almost seems like a house is being described – “bright with nickel, in it’s monstrous length with triumphant hat-boxes and supper-boxes and tool-boxes, and terraced with a labyrinth of windshields that mirrored a dozen suns.” Fitzgerald also writes “everybody had seen it” (obviously referring to Gatsby’s car). The fact that everybody had seen this car shows that it’s not just an average, everyday car but a special and exceptionally elegant car. On top of this, most cars in those days were black, but Gatsby’s car being a “rich cream colour” made it all the more expensive and unusual. This reflects Gatsby in the way that he has only the best and the most expensive. You can only imagine that someone of Gatsby’s wealth and status would choose a car so complex and sophisticated.

In contrast to Gatsby, Nick works for his money and lives modestly. He cannot afford to throw huge extravagant parties every weekend, but he can afford to live fairly comfortably. Nick does own a car, an “old Dodge.” This reflects on the lifestyle that Nick lives, in the way that he can’t afford to fruitlessly throw money away on a car, which everyone has seen. He can’t afford to buy a car, which is a rich, cream colour – but he can afford to have a simpler car, which its purpose is to take Nick to different places. “I had a dog and an old dodge and a Finnish woman, who made my bed and cooked my breakfast…” This quote implies that Nick has one Finnish woman working for him, as oppose to Gatsby and even Tom and Daisy Buchanan, who can obviously afford to hire several people without a problem.

On the other hand, there’s Wilson. Cars are Wilson’s livelihood, and without the service of people like Tom Buchanan, Wilson wouldn’t be able to afford anything for himself or his wife, Myrtle. It becomes obvious to the reader that Wilson is very poor – for example, by the description of where he lives – “This is a valley of ashes – a fantastic farm where ashes grow like wheat into ridges and hills and grotesque gardens; where ashes take the forms of houses and chimneys and rising smoke and, finally, with a transcendent effort, of ash-grey men, who move dimly and already crumbling through the powdery air.” This lifestyle is a huge contrast to Gatsby’s lavish lifestyle. Wilson relies on Tom’s custom, and this is confirmed when he says to Tom in a somewhat desperate way, “When are you going to sell me that car?” Tom suggests that he should take the car somewhere else, but Wilson needs Tom to sell him that car, to afford to cater to Myrtle’s (and his own) needs. After Tom replies, Wilson hastily backtracks and apologises – because he needs the money badly.

Someone else whose character is revealed by the use of cars is Jordan Baker. She is a careless driver. Firstly, she cheats in a golf tournament beforehand, which gives the reader the impression that she’s a liar. Next, she lies about leaving someone else’s coupe in the rain. And then she talks with Nick about how it takes two to make an accident. Nick accuses her of not being careful, and she denies this. “I am careful.” “No, you’re not.” “Well other people are.” This shows how careless she is and how little regard she has for the safety of others, and herself as well. Nick suggests she may one day meet someone as careless as herself. Jordan replies, “I hope I never will. I hate careless people. That’s why I like you.” Not only is Jordan Baker a hypocrite, but also she is immoral and dishonest, and Nick knows all of this. That’s why he says that he could never love her. Nick ends the chapter by saying, “I am one of the few honest people that I have ever known.”

At Gatsby’s party there is quite a significant crash. A new coupe was found lying in the ditch, right side up. It turned out to be the man from Gatsby’s library who crawled out – Owl Eyes. He said he knew little about driving, but he wasn’t even trying to drive. It was then uncovered that someone else was driving the car – a “pale, dangling individual.” The accident was caused because the wheel had come off. The two characters were pretty much not mentioned in the rest of the novel.

The most significant thing to do with cars in the novel, probably, is Myrtle’s unfortunate end. This is towards the end of the novel. They were driving into New York. It was Jordan Baker, Nick Caraway and Tom Buchanan in one car, and Daisy and Gatsby in the other. Myrtle assumes it is Tom driving in the car, because Tom was driving Gatsby’s car earlier, and she runs out into the road. Daisy is unaware of who this woman is, and she carries on driving. Myrtle dies instantly as soon as the car hits her. Gatsby tries to calm Daisy down and get her to stop, but as you can imagine Daisy was very distressed and kept on driving. Later on, Myrtle’s husband, George Wilson, seeks vengeance on his wife’s murderer. Tom tells Wilson that it was Gatsby’s car that killed his wife. Wilson, in a rage, killed Gatsby. His mistake gets Gatsby killed. As soon as Wilson has pulled the trigger on Gatsby, he turns it on himself.

I definitely found that the different cars used and described mirror the characters quite well. Gatsby is rich and elaborate, Nick is modest and comfortable, Tom and Daisy are rich (but not as rich as Gatsby) with their blue sports car, Wilson and Myrtle are poor, etc. The way Fitzgerald has used cars to reflect the personalities of the different characters in the novel are brilliant.