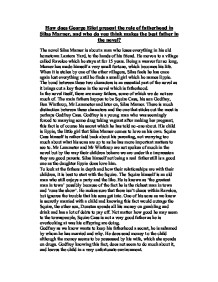 How does George Eliot present the role of fatherhood in Silas Marner, and who do you think makes the best father in the novel?

How does George Eliot present the role of fatherhood in Silas Marner, and who do you think makes the best father in the novel? The novel Silas Marner is about a man who loses everything in his old hometown Lantern Yard, to the hands of his friend. He moves to a village called Raveloe which he stays at for 15 years. Being a weaver for so long, Marner has made himself a very small fortune, which becomes his life. When it is stolen by one of the other villagers, Silas feels he has once again lost everything until he finds a small girl which he names Eppie. The bond between these two characters is an essential part of the novel as it brings out a key theme in the novel which is fatherhood. In the novel itself, there are many fathers, some of which we do not see much of. ...read more.

To look at the fathers in depth and how their relationships are with their children, it is best to start with the Squire. The Squire himself is an old man who still enjoys a party and the like. He is known as 'the greatest man in town' possibly because of the fact he is the richest man in town and 'runs the show'. He makes sure that there isn't chaos within Raveloe, but ignores the trouble that his sons get into. One of his sons as we know is secretly married with a child and knowing this fact would outrage the Squire, the other son, Dunstan spends all his money on gambling and drink and has a lot of debts to pay off. Not matter how good he may seem to the townspeople, Squire Cass is not a very good father as he is overlooking at was his offspring are doing. ...read more.

Marner makes him cottage more homely to accommodate Eppie. This is helped by Godfrey, who keeps giving Silas large amounts of money so he can look after Eppie properly. Silas however is unaware of the fact Godfrey is in fact the father and thinks nothing of it. As the novel climaxes, Godfrey pays a visit to Silas' cottage, revealing the identity of Eppie's parents, asking Marner to give Eppie to him. Eppie, decides to stay with Marner, as she has found him a true father, no matter what blood runs through him. By the end of the novel, the obvious thing to say is that Silas is the best father. You could say Godfrey was, as he has the money to give a child many advantages in life, but Marner is the most caring of the two making him, the best father in Raveloe. By Christopher Pettit-Mee, 10MAE ...read more.