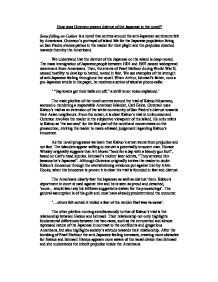 How does Guterson present distrust of the Japanese in the novel Snow falling on Cedars?

How does Guterson present distrust of the Japanese in the novel? Snow falling on Cedars is a novel that centres around the anti-Japanese sentiments felt by Americans. Guterson's portrayal of island life for the Japanese population living on San Piedro evokes pathos in the reader for their plight and the prejudice directed towards them by the Americans. We understand that the distrust of the Japanese on the island is deep-rooted. The mass immigration of Japanese people between 1901 and 1907 caused widespread resentment from Americans. Then, the events of Pearl Harbour during World War II, caused hostility to develop to hatred, rooted in fear. We see examples of the strength of anti-Japanese feeling throughout the novel. When Arthur, Ishmael's father, runs a pro-Japanese article in his paper, he receives a series of abusive phone-calla: ' "Jap lovers get their balls cut off," a shrill tenor voice explained.' The main plotline of the novel centres around the trial of Kabuo Miyamoto, accused o murdering a respectable American Islander, Carl Heine. ...read more.

The general assumption is of his guilt and most have already predetermined the outcome: '...others felt certain it veiled a fear of the verdict that was to come'. The other plotline running simultaneously to that of Kabuo's trial is the relationship between Hatsue and Ishmael. Their relationship not only highlights fundamental differences between the two races, such as the introverted and almost repressed nature of the Japanese in contrast to the confidents and gregarious Americans, but also highlights society's attitude towards their relationship. After the bombing of Pearl Harbour the anti-Japanese feeling increases, creating more obstacles for Hatsue and Ishmael. Hatsue appears more aware of the racial divide than Ishmael and she understands the inbuilt prejudice inside the Americans. ' "Look at my face...look at my eyes, Ishmael. My face is the face of the people who did it...We're going to have trouble." ' The general panic in the aftermath of Pearl Harbour lead the inhabitants of San Piedro to see the Japanese, previously as merely unwelcome, as traitors and spies. ...read more.

We learn that the oppression of the Japanese is deep-rooted and the climax of this prejudice, resulting in the mass evacuation of all those of Japanese ancestry, is the result of over fifty years of distrust and hostility. Guterson creates many blatantly racist characters in the novel such as Etta Heine and Horace Whaley. One lesser-known character, Private Gerald Willis, clearly displays the strength of hatred towards the Japanese in the height of the war: '[He] had propped the boy's penis up...and shot carbine rounds until he'd blown the head of it off.' This is shocking for a reader and effectively shows the animosity felt by the Americans towards the Japanese. Guterson also constantly uses derogatory language, such as referring to the Japanese as 'Japs' throughout the novel, to indoctrinate the reader into the mindset of the Americans. The loathing of the Japanese at certain points in the book is palpable, through Guterson's explicit and brutal language, "there ain't nothing left there but sand and bullshit and a whole lot of little Jap pieces". The alienation of the Japanese people is clear throughout the novel, creating a sense of distance, and sympathy, between the reader and their plight. ...read more.