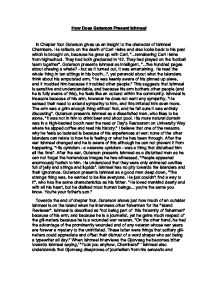 How Does Guterson Present Ishmael.

How Does Guterson Present Ishmael In Chapter four Guterson gives us an insight to the character of Ishmael Chambers. He reflects on the death of Carl Heine and also looks back to his past which is brought on, because he grew up with Carl, "...remebering Carl Heine from highschool. They had both graduated in '42. They had played on the football team together". Guterson presents Ishmael as intelligent, "...five hundred pages about chasing a whale? - but as it turned out, it was entertaining. He read the whole thing in ten sittings in his booth...", yet paranoid about what the islanders think about his amputated arm, "He was keenly aware of his pinned up sleve, and it troubled him because it troubled other people." This suggests that Ishmael is sensitive and understandable, and because his arm bothers other people (and he is fully aware of this), he feels like an outcast within the community. Ishmael is insecure because of his arm, however he does not want any sympathy, "He sensed their need to extend sympathy to him, and this irritated him even more. The arm was a grim enough thing without that, and he felt sure it was entirely discusting". Guterson presents Ishmael as a dissatisfied man, who likes to be alone, "It was not in him to drink beer and shoot pool. ...read more.

The reason for this is because the weather involves the islander people and their lives which, they find to be more interesting and intriguing. They find Kabuo fascinating, although they do not understand him. The islanders have no control over the weather but they believe that they all know what the outcome of the trial will be. Guterson highlights how small the island is when he says, "It was as if they had been waiting all along for something enormous to enter their lives and make them part of the new." Again, Ishmael is presented as an outside as he does not behave the same as the other islanders. Although Kabuo is married to Hatsue, he is insignificant to Ishmael. Guterson shows this during the storm when he says, "The snowfall obliterated the borders between the fields and made Kabuo Miyamoto's long-cherished seven acres indistinguishable from the land that surrounded him." Here, Guterson is saying that the storm has covered all of the land, and on the surface it is all the same. The seven acres are symbolic of Kabuo and Carl Heine/Ishmael and the fact that it is seperated, is insignificant and really does not matter. Although Ishmael doesn't understand why somebody would kill another human being over land he tries to make sense of it, "He had been to war, after all". ...read more.

He would turn his thoughts toward Hatsue and then keep them there..." I believe that in the novel, Guterson presented Ishmael as a compassionate character before he went to war. This is demonstrated through the meetings he has with Hatsue in the Cedar tree and love he shows for her. Throughout the novel, Guterson presents Ishmael as a man who still struggles to cope with his feelings about Hatsue and understand why she had abruptly finished their relationship although it was a long time ago. However, when Ishmael goes to war and witness' some traumatic things he appears to lose apart of him. Ishmael becomes isolated and believes that nobody can relate to him, therefore he prefers to be alone. POPULATION STRUCTURE ASSIGNMENT What effects might be found in a country (or area) which has an increasingly elderly population structure (low BR, below the level of DR)? A low Birth Rate means fewer children in the population. This will have an impact on schools. There will be a surplus of school places and schools may have to close or amalgamate. This will cause some pupils to have to travel further to school. School buildings will have to be disposed of, or other uses found for them. Teachers may be made redundant. It is, however, an opportunity to reduce class sizes as numbers of pupils fall. ...read more.