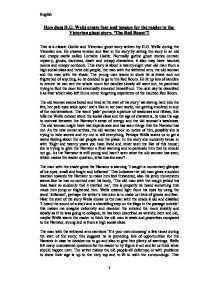 How does H.G. Wells create fear and tension for the reader in the Victorian ghost story The Red Room

How does H.G. Wells create fear and tension for the reader in the Victorian ghost story, 'The Red Room'? This is a classic Gothic and Victorian ghost story written by H.G. Wells during the Victorian era. He creates tension and fear in the story by setting the story in an old and creepy castle called Lorraine Castle. Normally gothic ghost stories contain mystery, ghosts, darkness, death and creepy characters; it also may have haunted rooms and creepy corridors. This story is about a twenty-eight year old man from a high social class and three old people, the man with the withered arm, the old woman and the man with the shade. The young man wants to show he is brave and not frightened of anything, so he decided to go to the Red Room. He lit up lots of candles to ensure he can see the whole room but candles slowly all went out; he panicked trying to find the door but eventually knocked himself out. The next day he described it as Fear which also left him a never forgetting experience of the haunted Red Room. The old woman seems bored and tired at the start of the story 'sat staring hard into the fire, her pale eyes wide open' she's like in her own world, not getting involved in any of the conversations. The word 'pale' portrays a picture of weakness and illness, this tells me Wells noticed about the social class and the age of characters, he uses the age to contrast between the Narrator's sense of energy and the old woman's weakness. ...read more.

This will build up the tension to let us think of how the Narrator copes with these situations. The writer also shows us darkness of the passage and the only light source is from the candle, 'A shadow came sweeping up after me' this shows that as he walks, the shadows from behind is following, keeping a distance from the light and the shadows in front is moving away. The word 'sweeping' makes me think of chasing and running, this might be that the darkness is following the Narrator, as if it is engulfing the light. Wells compared the crackling fire in the old people's room and the flickering flame to show that the passage is darker and creepier. This gives the reader the feeling that the shadows could move towards him when the candle runs out and surround him in the darkness. The corridor to the Red Room is dim with only moonlight shining through the windows 'Moonlight coming in by the great window on the grand staircase picked everything in vivid black shadow or silvery illumination', this quote indicates moonlight brightening up the corridor but the darkness lying in the corners that the light. The shadows blocked up the view of figures which make the Narrator portray fear and panic inside him; he holds the revolver to show us that he is trying to reassure himself even if there is anything that could get to him. The statues hidden in the shadows making the Narrator dare not to move, this will make the readers think to themselves and wonder what is behind the shadows. ...read more.

Wells might want us to build an image of the place, nothing else but darkness. The candles went out fast, 'like a ragged stormcloud sweeping out the stars', this indicates that the candles are going out fast like a stormcloud blocking out all the candles. Wells uses this imagery to show that the candles are going out fast, this will make the reader think of the places will get darker and darker. The word 'stormcloud' let me think of darkness and storm. This might be that the candles are going out quickly like a storm destroying things. The story of the Red Room was passed on from people to people 'one could well understand the legends that had sprouted in its black corner', this quote shows that the story might started off small and as people passed it on to people the story changed and become a exaggerating story. The word 'sprouted' lets me think of generating and growing, this is because more and more people know the secret. Wells wants us to think that the story is as old as the place; this will make reader think that when people hear the story, they will know where it stated off which also makes the places sound haunted and scary. In conclusion I would say that the 'Red Room' story is an interesting story to read. I think that H.G. Wells have done a good job at making the story fascinating. The story has some good description that attracts reader's attention. I think that the writer have created fear and tension in this Victorian ghost story. ?? ?? ?? ?? English 1 ...read more.