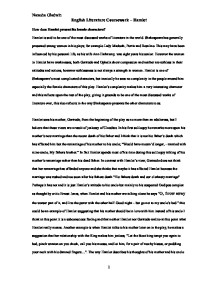 How does Hamlet present its female characters

How does Hamlet present its female characters? Hamlet is said to be one of the most discussed works of literature in the world. Shakespeare has generally presented strong women in his plays; for example Lady Macbeth, Portia and Rosaline. This may have been influenced by his personal life, as his wife Ann Hathaway, was eight years his senior. However the women in Hamlet have weaknesses, both Gertrude and Ophelia show compassion and neither are ruthless in their attitudes and actions, however ruthlessness is not always a strength in women. Hamlet is one of Shakespeare's most complicated characters, but ironically he sees no complexity in the people around him especially the female characters of this play. Hamlet's complexity makes him a very interesting character and this reflects upon the rest of the play, giving it grounds to be one of the most discussed works of literature ever, this also reflects in the way Shakespeare presents the other characters to us. Hamlet sees his mother, Gertrude, from the beginning of the play as no more than an adulteress, but I believe that these views are a result of jealousy of Claudius. In his first soliloquy he remarks more upon his mother's new marriage than the recent death of his father and I think that it is not his father's death which has affected ...read more.

Good night - but go not to my uncle's bed." This could be taken as a suggestion that his mother should be in love with him instead of his uncle, I do not think that either of the characters are sure of what Hamlet means at this stage. From a Freudian perspective we know that Hamlet's mind has both a conscious level and a subconscious level, which gives the explanation as to why only until after the death of Ophelia does Hamlet start to suspect his own love of his mother. Ophelia, Polinius's daughter is the object of Hamlet's love and affections. Ophelia is dependent on the men in her life to tell her how to behave, especially her father and her brother Laertes. Later she goes on to betray Hamlet and gives into Polinius's schemes to spy on Hamlet. G. Wilson Knight commented on Ophelia's innocence in The Embassy of Death; "the prettiness of Ophelia does in truth enclose a spirit as fragile and untrustworthy as her earthly beauty;" In her first scene of the play she is lectured by both her brother and father, and they warn her not to put faith in Hamlet's love for her as young men are not to be trusted, she is witty as she quips back "Whiles, like a puff'd and reckless libertine, himself the primrose path of dalliance treads, and recks not his own rede." ...read more.

Jacqueline Rose - critic, what Rose is trying to say here is that a large burden has been placed upon Gertrude because of Hamlet's Oedipus complex, but I also think that Hamlet has a large weight on his shoulders. In this quote Rose is talking about Hamlet and Gertrude's incestuous relationship, I disagree with Rose on this point as Gertrude does not know of Hamlets feelings for her and consciously neither does Hamlet until he suspects himself after Ophelia's death. The weight that Hamlet carries is that of avenging his father's death and having his sanity constantly questioned by so many people. I feel the play has a continuous representation of strong women. This may be doubted because Gertrude was unable to survive on her own so she married her brother in law, which I believe she did for the good of the nation and because she may have felt that Hamlet was not yet ready to be king. I also think that Ophelia committing suicide was a strength in her as it was considered a sin, she also stood up to Hamlet in the play scene and defended Gertrude. I also believe that in contrast with the women of the play Hamlet is the weaker character as he is indecisive and lacks courage. I think Shakespeare generally represents women as strong characters in his plays and has done so again with the female characters in Hamlet. ...read more.