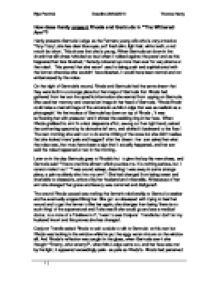 How does Hardy present Rhoda and Gertrude in The Withered Arm?

How does Hardy present Rhoda and Gertrude in "The Withered Arm"? Hardy presents Gertrude Lodge as the Farmers young wife who is very attractive 'Tisty-Tosty', she has clear blue eyes, soft fresh skin, light hair, white teeth, a red mouth but short. This shows that she is young. When Gertrude sat down in the church her silk dress 'whistled so loud when it rubbed against the pews' and as this happened her face blushed, 'the lady coloured up more than ever for very shame at the noise'. This proved that she wasn't used to being posh and sophisticated with the farmer otherwise she wouldn't have blushed, it would have been normal and not embarrassed by the noise. On the night of Gertrude's wound, Rhoda and Gertrude had the same dream that they were both in a strange place but the image of Gertrude that Rhoda had gathered from her son the specific information she wanted from spying on Gertrude. ...read more.

She got so obsessed with trying to heal her wound and to get the farmer to like her again, she changes from being 'there is no such thing' of the supernatural and if she was ill she would go and see a medical doctor, to a more of a 'I believe in it', 'I want to see Conjuror Trendle but don't let my husband know' and this proves she has changed. Conjuror Trendle asked Rhoda to wait outside to talk to Gertrude on his own but Rhoda was looking in the window while he put the eggy water mixture on the window sill. And Rhoda's reflection was caught in the glass, when Gertrude saw it she thought '"Enemy, what enemy?", when Mrs Lodge came out, and her face was met by the light, it appeared exceedingly pale- as pale as Rhoda's. Rhoda had perceived that her companion had quite changed. ...read more.

But Gertrude the farmer's wife had a high status but she became irritable and superstitious, she had gotten a low status and no child. She is also quite gullible because anything the farmer said she believed and didn't question anything. The farmer said before he went to see Rhoda and his son '"I take these in case I shouldn't get back to-night from the person I am going to visit. Don't be alarmed if I am not in by ten, and close up the house as usual. I shall be home tomorrow for certain." She meant then to tell her husband.' The only time that Rhoda and her son got attention from the farmer is when his son gets hanged. Gertrude died on the way back 'she never reached home alive' and the farmer died a few years later but when the story ended Rhoda was the last of the main characters still alive, she lived the longest. ?? ?? ?? ?? Riya Panchal Deadline 28/04/2010 Thomas Hardy 1 ...read more.