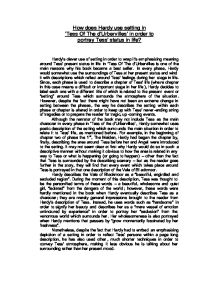 How does Hardy use setting in &quot;Tess Of The d'Urbervilles&quot; in order to portray Tess' status in life?

How does Hardy use setting in 'Tess Of The d'Urbervilles' in order to portray Tess' status in life? Hardy's clever use of setting in order to wrap it's emphasizing meaning around Tess' present status in life in 'Tess Of The d'Urbervilles is one of the main reasons why his book became a best seller. In every phase, Hardy would somewhat use the surroundings of Tess at her present status and wind it with descriptions which reflect around Tess' feelings during her stage in life. Since, each phase is used to describe a chapter of Tess' life (where chapter in this case means a difficult or important stage in her life), Hardy decides to label each one with a different title of which is related to the present event or "setting" around Tess which surrounds the atmosphere of the situation. However, despite the fact there might have not been an extreme change in setting between the phases, the way he describes the setting within each phase or chapter is altered in order to keep up with Tess' never-ending string of tragedies or to prepare the reader for tragic, up-coming events. Although the narrator of the book may not include Tess as the main character in every phase in 'Tess of the d'Urbervilles', Hardy somewhat uses poetic description of the setting which surrounds the main situation in order to relate it to Tess' life, as mentioned before. ...read more.

Here Hardy emphasizes the innocence of the dancing girls by calling them "white figures", ironically dancing amongst an envious, green landscape. During this point of the story, Hardy had used colour instead of expressive vocabulary in order to portray the general atmosphere of the situation. He had cleverly situated this in order to refer to what he had mentioned earlier on in the book when he narrated that Tess was yet an emotional vessel "untinctured by experience" - in other words, "uncoloured by experience". However, he later comes to mention that Tess was a "white figure, stood apart by the hedge alone", from Angel's point of view. This may be emphasizing that, while the rest of the band were caught up in a temporary whirl-wind of envy, Tess was the only outstanding one, depicting a strong symbol of pride upon her. Or this could also mean that, the "white figure", which is portrayed to be Tess, may be a reference to her purity. However, as we progress on in the book, we reveal Tess' evolving troubles, thus Hardy's altering tone in his use of description of Tess' settings. In phase the second, Maiden No More, Tess has left Tantridge after Alec impregnates her - following a rape - and returns back to the Vale of Blackmoor. ...read more.

After the end of every phase, we notice Hardy's effort in describing Tess' setting, due to the fact that he mostly finishes off the phases with a summation or conclusive description of the setting surrounding Tess. We notice how before the end of every phase, Hardy's description of setting allows the readers to compare the description provided of the setting during the end of the phase with the description provided at the beginning of the phase. This allows readers to contrast the feelings being felt by Tess (or so it seems due to the descriptions) at the beginning and end of the phase, allowing us to observe her emotional transition. Hardy's build up of his descriptive criteria of the setting surrounding Tess provides readers with, not only the insight of Tess' feelings, but also how she views her surroundings (if we assume that the narrator's depiction of her surroundings are shared by her emotions). This allows readers to view the setting from her perspective, observing what she might be feeling during her phase in the novel. If it weren't for Hardy's poetic use of description, his readers would have found Tess' feelings and any emotional relevance to her state of mind, hardly significant. Sanyia Saidova 11G ...read more.