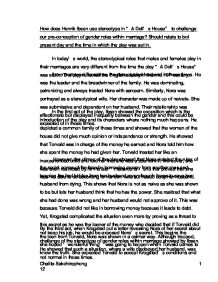 How does Henrik Ibsen use stereotype in &quot;A Doll's House&quot; to challenge our pre-conception of gender roles within marriage? Should relate to bot present day and the time in which the play was set in.

How does Henrik Ibsen use stereotype in "A Doll's House" to challenge our pre-conception of gender roles within marriage? Should relate to bot present day and the time in which the play was set in. In today's world, the stereotypical roles that males and females play in their marriages are very different from the time the play "A Doll's House" was set in. The play reflected the English society in the mid 19th century. Ibsen portrayed Torvald as the stereotypical husband in those times. He was the leader and the breadwinner of the family. He was dominating, patronizing and always treated Nora with sarcasm. Similarly, Nora was portrayed as a stereotypical wife. Her character was made up of naivete. She was submissive and dependent on her husband. Their relationship was affectionate but displayed inequality between the gender and this could be expected of in those times. ...read more.

This shows that Nora is not as naive as she was shown to be but lets her husband think that he has the power. She realized that what she had done was wrong and her husband would not approve of it. This was because Torvald did not like in borrowing money because it leads to debt. Yet, Krogstad complicated the situation even more by proving as a threat to this secret as he was the loaner of the money who decided that if Torvald did not keep his job, he would be exposed Nora's secret. This begins the challenge of the stereotype of gender roles within marriage showed by Ibsen. He showed that such a situation, where a wife disobeyed her husband, was not normal in those times. By the third act, when Krogstad put a letter revealing Nora of her secret about the loan from Torvald, Nora was shown in a calmer way. ...read more.

The other anomaly is Torvald who, although, is supposed to belong to the superior sex 'loses' in the end and is absolutely powerless to the point that he had to plead Nora to stay with him. However, in today's world, the gender roles played within the marriage are absolutely contrasting to those mentioned above. A stereotypical wife does not have to play the dependent and obedient role and the husband does not necessarily have to play the role of a dominating person of the family. Both the genders play equal part in the upbringing of the family. Both of them can work, earn and be the owner of their own lives without having to obey one another. Furthermore, divorce has become a more common issue in today's world and this was not the case in the time "A Doll's House" was set. 1 1 Chalita Sakchiraphong 12 ...read more.