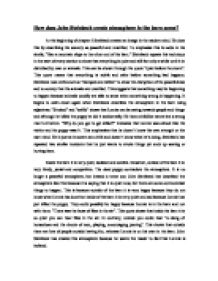 How does John Steinbeck create atmosphere in the barn in Chapter 5?

How does John Steinbeck create atmosphere in the barn scene? At the beginning of chapter 5 Steinbeck creates an image in the readers mind. He does this by describing the scenery as peaceful and unsettled. To emphasise this he adds in the simile, "like a mountain slope to the other end of the barn." Steinbeck repeats this technique in the start of every section to show that everything is quiet and still for only a while until it is disturbed by man or animals. This can be shown through the quote "quiet before the storm". This quote means that everything is subtle and calm before something bad happens. Steinbeck uses verbs such as "stamped and rattled" to show the disruption of the peacefulness and to convey that the animals are unsettled. ...read more.

This links with what he had done to the pup because he didn't mean to hurt Curley or kill the pup; it was because he is so strong that if he gets surprised or scared he uses his strength unknowingly. Lastly, the mouse that he killed is again the same type of situation as this and could have foreshadowed further occurrences. This is because he 'over-petted' the mouse and done the same to the pup. These three situations show that Lennie is unaware of his own strength and what he had happened in all three situations all foreshadowed the death of the pup. Also, the situation between Lennie and Curley showed how strong Lennie was and this led onto him killing the pup and Curley's wife. ...read more.