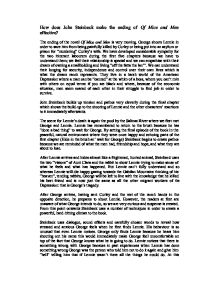 How does John Steinbeck make the ending of Of Mice and Men effective?

How does John Steinbeck make the ending of Of Mice and Men effective? The ending of the novel Of Mice and Men is very moving. George shoots Lennie in order to save him from being painfully killed by Curley or being put into an asylum or prison for "murdering" Curley's wife. We have developed considerable sympathy for the two itinerant labourers during the first five chapters because we have to understand them; we feel their relationship is special and we can empathise with their dream of owning a smallholding and living "off the fatta the lan'". We can understand their longing for security, independence and control over their own lives which is what the dream ranch represents. They live in a harsh world of the American Depression where a man can be "canned" at the whim of a boss, where you can't mix with others on equal terms if you are black and where, because of the economic situation, men seem scared of each other in their struggle to find job in order to survive. ...read more.

After George arrives, having sent Curley and the rest of the ranch hands in the opposite direction, he prepares to shoot Lennie. However, the readers at first are unaware of what George intends to do, so we are very curious and suspense is created. From this point onwards Steinbeck uses a number of techniques in order to create a powerful, hard-hitting climax to the book. Steinbeck uses dialogue, sound effects and carefully chosen words to reveal how stressed and anxious George feels when he first finds Lennie. His behaviour is so unusual that even Lennie notices. George only finds Lennie because he hears him shouting out his name this would immediately make George feel uncomfortable on top of the fact that George knows what he is going to do. Lennie notices that there is something wrong with George because in past experiences when Lennie has done something wrong George was the person who told him not to do it again and give him "h**l" telling him that if Lennie wasn't there all the things he could do. ...read more.

The fact that it was quick could be because George knew that he had to do it and if he didn't do it then, then it could have been too late and Curley have seen and killed Lennie in a horrible way. It could also be because George thought that if he didn't do it then he wouldn't do it because he couldn't. We know that it was quick because there are no hesitations and the sentence in which George pulls the trigger is very short and sharp. Straight after George pulling the trigger Lennie falls to the ground and just lays there without quivering instantly George knows he is dead. After the shooting Steinbeck shows us the reactions of the ranch hands. We know straight away that there is a contrast in views of the shooting of Lennie Slim is very compassionate and shows his sympathy towards George as if he understands the way he is feeling. However, the coldness of Carlson is shown and readers would have come to the conclusion that Carlson is the sort of person that does not feel. His statement at the end is very hard-hitting on George especially after he just shot his best friend, the person he had travelled with for practically his whole life. ...read more.