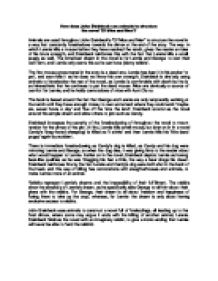 How does John Steinbeck use animals to structure the novel 'Of Mice and Men'?

How does John Steinbeck use animals to structure the novel 'Of Mice and Men'? Animals are used throughout John Steinbeck's "Of Mice and Men" to structure the novel in a way that constantly foreshadows towards the climax at the end of the story. The way in which Lennie kills a mouse before they have reached the ranch, gives the reader an idea of his brute strength, and Steinbeck reinforces this with the fact that Lennie kills a small puppy as well. The American dream in the novel is for Lennie and George to own their own farm, and Lennie only wants this so he can have 'plenty rabbits'. ...read more.

The book is based around the fact that George and Lennie are only temporarily working at the ranch until they have enough money to own some land where they could work 'maybe six, seven hours a day' and 'live off the fatta the land'. Steinbeck structures the novel around this simple dream and allow others to join such as Candy. Steinbeck increases the severity of the foreshadowing of throughout the novel to mount tension for the climax of the plot. At first, Lennie kills small mouse, but later on in the novel Candy's 'drag-footed sheepdog' is killed as 'it stinks' and then Lennie kills his 'little dead puppy' again by accident. ...read more.

Rabbits represent Lennie's dreams and the impossibility of their fulfillment. The rabbits show the simplicity of Lennie's dream, as he specifically asks George to tell him about their plans with the rabbits. For George, their dream is all about freedom and happiness of 'being there to take up the crop', whereas, for Lennie the dream is only about having exclusive access to rabbits. John Steinbeck uses animals to construct a novel full of forebodings, all leading up to the final climax, where some may argue it ends with the killing of another animal, Lennie. Steinbeck finishes the novel with an imaginary rabbit, to give a ironic ending that Lennie will never be able to 'tend the rabbits'. ...read more.

Though not the most insightful or interesting essay, this essay is to the point and utilises a very succinctly formed analysis. The skills which are shown here are clearly indicative of an A grade for GCSE with a number of ...

Though not the most insightful or interesting essay, this essay is to the point and utilises a very succinctly formed analysis. The skills which are shown here are clearly indicative of an A grade for GCSE with a number of animals' symbolism considered being sufficient for the question and to a significant amount of depth. The candidate's structure is also very good, writing a good, strong introduction and conclusion that both compliment the main body of the essay. There is evidence of great care taken in structuring this essay.

The Level of Analysis shown here is very formulaic and prescribed but it does the job, happily satisfying the mark scheme to achieve a low A grade. To get higher there is little to teach in the way of analytical skills, but to perhaps incorporate some ambiguity in the analysis such as proposing two possible interpretations of the same symbol or motif would be good because it would show a deep-thought analysis that lets the examiner know candidates are capable of cohesive, non-linear thought.

There is a sound comprehension of the characters and the foreshadowing of Lennie's death, and also a sensitive realisation of the congruence between George and Lennie and Candy and his dog. All in all this is a very strong essay.

The Quality of Written Communication is very good. There are no major issues when is comes to the clarity of the candidate's written expression. All grammar, punctuation and spelling are perfect, showing the benefits of a simple spell-check (manual, because some spell-checkers do not pick up on homonyms and grammar errors), so well done to this candidate for their excellence in written communication.