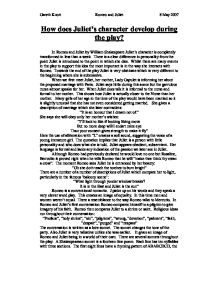 How does Juliet's character develop during the play?

How does Juliet's character develop during the play? In Romeo and Juliet by William Shakespeare Juliet's character is completely transformed in less than a week. There is a clear difference in personality from the point Juliet is introduced to the point in which she dies. Whilst there are many events in the play to support this idea the most important is in the way she interacts with Romeo. Towards the end of the play Juliet is very obstinate which is very different to the beginning where she is submissive. When we first meet Juliet, her mother, Lady Capulet is informing her about the proposed marriage with Paris. Juliet says little during this scene but the garrulous nurse almost speaks for her. When Juliet does talk it is informal to the nurse and formal to her mother. This shows how Juliet is actually closer to the Nurse than her mother. Many girls of her age in the time of the play would have been married so it is slightly unusual that she has not even considered getting married. She gives a description of marriage which she later contradicts: "It is an honour that I dream not of." She says she will obey only her mother's wishes: "I'll look to like if looking liking move But no more deep will I endart mine eye Than your consent gives strength to make it fly" Here the use of alliteration with "L" creates a soft sound, suggesting the voice of a young immature girl. ...read more.

The nurse complains she is ill and tries to change the subject. This frustrates Juliet who then starts to beg. The nurse however likes the power this gives her. The nurse uses s****l innuendo as she jokes "you shall bear the burden soon at night". Romeo personifies death just before he marries in Act 2 Scene 6. This hints towards the awaiting tragedy: "Love-devouring Death" The Friar sums up the play in one line by using oxymorons by saying "These violent delights have violent ends". Romeo in elaborate language tells of their love like a rich description of a coat of arms. Juliet argues however that "conceit more rich in matter than in words". Romeo and Juliet leave to be married. In Act 3 Scene 2 Juliet speaks in an epithalamium filled with hope fear, love and excitement. She is unaware of the murderous events of the day and with her love for Romeo, longs for the night to come. Juliet reminds the audience how important it is for her love with Romeo to remain secret when she exclaims, "Romeo leap to these arms, untalked of and unseen". She continues with the imagery of falconry: "Hood my unmanned blood, bating my cheeks." Romeo is her "day in night". This shows how she too uses elaborate romantic language. When the Nurse arrives she again withholds important information from Juliet. ...read more.

He decides that he will bring the wedding forward even further. By doing this he is accelerating the awaiting tragedy. Juliet starts Act 4 Scene 3 by deliberately deceives her mother by using double meanings and dramatic irony. She then sends her mother and the Nurse away. Alone, in a soliloquy, she will fight her fears, plucking up the courage to drink the mixture. If the mixture doesn't work she will kill herself with a dagger rather than commit bigamy. Juliet reveals her true emotions by questioning the Friar's motives with a repetitive list of what could go wrong: "What if it be a poison which the Friar..." She proves her change in character by drinking the potion. This is a sign of great courage. Despite all her fears she will risk everything. In at 5 Scene 3 Juliet awakens and immediately asks, "Where is my Romeo". The Friar, in a panic, attempts to get Juliet to leave before the Watch enters. Juliet is rushed and impulsively grabs Romeo's dagger and abruptly kills herself. Looking back at Juliet's character from the beginning of the play it is hard to believe how Juliet had changed so much, in so little time. In the first scene we see her she appears to be like a little incapable of the passion she later shows. When she dies she doesn't consider her actions she just carries them out. Juliet developed, because of her love for Romeo, into a women. Gareth Knott Romeo and Juliet 8 May 2007 ...read more.