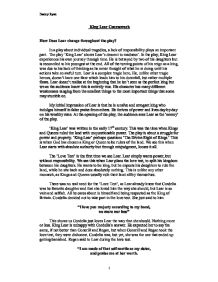 How Does Lear change throughout the play?

King Lear Coursework How Does Lear change throughout the play? In a play about individual tragedies, a lack of responsibility plays an important part. The play 'King Lear' shows Lear's descent to madness'. In the play, King Lear experiences his own journey through time. He is betrayed by two of his daughters but is reconciled to his youngest at the end. All of the turning points of his reign as a king, was due to his lack of thinking as he never thought of what he is doing until his actions take an awful turn. Lear is a complex tragic hero. He, unlike other tragic heroes, doesn't have one flaw which leads him to his downfall, but rather multiple flaws. Lear doesn't realise at the beginning that he isn't seen as the perfect king but we as the audience know this is entirely true. His character has many different weaknesses ranging from the smallest things to the most important things that some may stumble on. My initial impression of Lear is that he is a na�ve and arrogant king who indulges himself in false praise from others. He thrives of power and lives day by day on his wealthy state. At the opening of the play, the audience sees Lear as the 'enemy' of the play. 'King Lear' was written in the early 17th century. This was the time when Kings and Queens ruled the land with unquestionable power. The play is about a struggle for power and property. ...read more.

The fool must somehow like Lear, as he is constantly with him entertaining him. If Lear is so vain and rash, then there is a good chance that the fool will never wanted to accompany Lear in the first place. Regan and Cornwall put Kent in the stocks, although he is only a messenger. Lear comments on their actions "Tis worse than murder to do upon respect such violent outrage" This shows us how hard this is hitting Lear. For the first time we see Lear sympathize for others. He recognizes that Regan and Cornwall are showing him no respect. He says that this is worse than murder. Lear finally accomplishes respect for others. I feel that Lear is a caring character at this stage of the play, but he still hasn't fully sustained an understanding of the world around him, as he can't fully recognize what Gonerill and Regan are planning. Lear is locked out in the storm. This shows us that he is far different from the all mighty and powerful king he once was, in Act 1 Scene 1, as in the earlier scenes he had full authority over absolutely everyone. Upon banishing Cordelia then following Kent, he realized how his actions took a bad turn. "I did her wrong" Lear finally realizes what he has done. He shows an understanding of his wrong actions when he banished Cordelia. This was a big mistake for Lear, when he banished Cordelia, as he never thought of Gonerill and Regan turning on him if he was to banish Cordelia. ...read more.

This is simply because he continually blames Gonerill and Regan, without recognizing that he played a huge role in their actions. I feel that Lear knows that it is his fault, but doesn't want to come clean and admit it. Lear is absolutely devastated by the death of Cordelia. He has lost everything. Power. Wealth, and his three daughters. "Howl, howl, howl, howl" Shakespeare uses repetition to empathize Lear's grief. We show sympathy for Lear, as the only thing he had, is no longer there. Lear avenges Cordelia's death by killing the slave who killed her. I feel that this is very telling in Lear's character, as it shows us that he would kill someone to get justice for the death of a loved one. Lear dies of a broken heart in the end. We could say that Lear is a victim of cruelty, as he watches the death of Cordelia take place. Lear is a loving and caring man one mistake, lead him to be a fallen king. I think that at the beginning we see Lear as the villain of the play. At the end of the play we show bitter sympathy towards him and then think that he is now the hero of the play, as he has had to cope with failure and the loss of a loss one. I think that the message that Shakespeare is trying to put across is that, it all goes to show that one mistake could cost someone very dearly as it did with King Lear. Danny Ryan 1 ...read more.