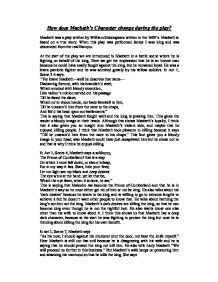 How does Macbeths Character change during the play

How does Macbeth's Character change during the play? Macbeth was a play written by William Shakespeare written in the 1600's. Macbeth is based on a true story. When this play was performed James I was king and was descended from the real Banquo. At the start of the play we are introduced to Macbeth in a battle scene where he is fighting on behalf of the king. Here we get the impression that he is an honest man because he could have easily fought against the king, but he remained loyal. He was a brave patriotic fighter and he was admired greatly by his fellow soldiers. In Act 1, Scene 2 it says: "For brave Macbeth-well he deserves that name- Disdaining fortune, with his brandish'd steel, Which smoked with b****y execution, Like valour's minion carved out his passage Till he faced the slave; Which ne'er shook hands, nor bade farewell to him, Till he unseam'd him from the nave to the chaps, And fix'd his head upon our battlements." This is saying that Macbeth fought well and the king is praising him. This gives the reader a b****y image in their heads. ...read more.

I think they did this because films are visual, so they showed Duncan's death. I thought this was good because it showed me of how b****y it was and then the viewer can understand why Macbeth's conscience attacks him throughout the play. Shortly after Macbeth has killed the king he says, "Methought I heard a voice cry 'Sleep no more! Macbeth doth murder sleep!'" Macbeth has just killed the king and he thinks he can hear voices; this is his conscience playing on him again. These attacks of conscience show us that Macbeth is sorry for what he has done and that he isn't that evil because he feels remorse for what he has done. In Act 2, Scene 3, Macbeth kills the guards, who are completely innocent, in order to take suspicion away from himself and Lady Macbeth. He is changing because at the start of the play he wasn't evil but now he is starting to kill more people who are innocent and he is ignoring his conscience. In Act 2, Scene 4, Macbeth is crowned king, which is a major change because now he is the supreme power. ...read more.

Macbeth dies honourably in battle at the hands of Macduff. In the last Act I think that the audience will feel sorry for Macbeth because even though he is evil , it is sad the way his world falls apart so quickly, and I think that many of the audience would be hoping that Macbeth won the battle at the end because everything is going bad for him, so the audience will be wishing that something goes right for him, which would be him winning the battle and remaining king. In conclusion Macbeth changed a lot during the play, at the start he was a honourable man but slowly the prediction by the witches of him becoming king got to his head and he decided with help from his wife to kill Duncan. After that he killed lots innocent people, but was plagued by his conscience for the rest of his life. At the end his wife died, which saddened him greatly. Then Birnam wood moved to Dunsinane and Macbeth knew he was going to die, Macbeth battled until his last breath but was killed by the suzerain born Macduff. ...read more.