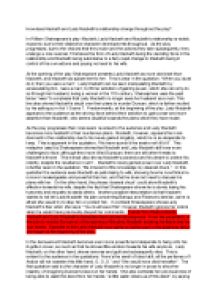 How does Macbeth and Lady Macbeths relationship change throughout the play?

﻿How does Macbeth and Lady Macbeth?s relationship change throughout the play? In William Shakespeare?s play Macbeth, Lady Macbeth and Macbeth?s relationship is widely explored, due to their distinctive character developments throughout. As the play progresses, due to the choices that they make and the actions they take subsequently, they undergo a role reversal. This takes the form of Lady Macbeth being the deciding force in the relationship and Macbeth being submissive to a fairy rapid change to Macbeth being in control of his own actions and paying no heed to his wife. At the opening of the play Shakespeare presents Lady Macbeth as more dominant than Macbeth, and Macbeth as subservient to her. This is clear in the quotation, ?When you durst do it, then you were a man?. Lady Macbeth can be seen manipulating Macbeth by emasculating him, ?were a man?, to fill her ambition of gaining power, which she can only do so through her husband, being a woman in the 11th century. Shakesphere uses the past tense ?were? to emphasis that Lady Macbeth no longer sees her husband as a man. ...read more.

In this quotation the audience sees Macbeth as patronising to wife, showing how he now thinks he is more knowledgeable and powerful than her, and that he does not need to discuss his plans with her. On the other hand, the phrase ?dearest chuck? could show Macbeth's affection towards his wife, despite the fact that Shakespeare shows he is slowly losing his humanity and empathy towards others. Another possible interpretation is that Macbeth wishes to not tell Lady Macbeth his plan concerning Banquo and Fleance?s demise, as he is afraid she would try to stop him or protect him. In contrast Shakespeare shows Lady Macbeth?s fear when she says: ?You must leave this?, however Macbeth ignores her orders when he would have previously obeyed her commands. Overall from these extracts, Macbeth and Lady Macbeth?s characters have shown development. From his uncertainty of the plan to murder Duncan at of the opening of the play, Macbeth is taking his future into his own hands. Opposite to this Lady Macbeth now wants no further part in this business which she began at the beginning of the play. ...read more.

In the second quote, proclaimed by Macbeth, it is evident to the audience that he now no longer cares about his wife and is only focused on the battle which is about to take place. His only concern is to maintain the power he has gained. Also his statement shows the fragility of life, which Shakespeare explores further through Macbeth's character in the ?Out, Out? monologue. Overall, at the end of the play, Lady Macbeth and Macbeth?s characters have drastically changed. Lady Macbeth can no longer be seen as courageous, hard-hearted and powerful, but instead a confused woman overwhelmed by regret and remorse, whereas Macbeth has become a heartless killer, despite his loyalty to the throne and disaprovance of Duncan?s assassination at the beginning of the play. In conclusion, where Lady Macbeth can be seen as the most dominant in the relationship at the opening of the play and the initiator of their murderous intentions, to subservient to Macbeth and not wanting to continue with their plans, to a mad woman overwhelmed by remorse, Macbeth can be seen as constantly gaining more and more power throughout the play, to the point at which he no longer cares about his wife and shows little remorse after her death. 912 approx words ...read more.