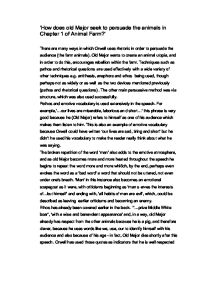 How does Major seek to persuade the animals in chapter one of Animal Farm?

'How does old Major seek to persuade the animals in Chapter 1 of Animal Farm?' There are many ways in which Orwell uses rhetoric in order to persuade the audience (the farm animals). Old Major wants to create an animal utopia, and in order to do this, encourages rebellion within the farm. Techniques such as pathos and rhetorical questions are used effectively with a wide variety of other techniques e.g. antithesis, anaphora and ethos being used, though perhaps not as widely or as well as the two devices mentioned previously (pathos and rhetorical questions). The other main persuasive method was via structure, which was also used successfully. Pathos and emotive vocabulary is used extensively in the speech. For example,'...our lives are miserable, laborious and short...' this phrase is very good because he (Old Major) refers to himself as one of his audience which makes them listen to him. This is also an example of emotive vocabulary because Orwell could have written 'our lives are sad, tiring and short' but he didn't he used his vocabulary to make the reader really think about what he was saying. ...read more.

Note how he uses the word 'comrades'-it is used extensively and is one of the linguistic points at which one can identify this speech, and the rest of the book with the communist Bolshevik revolution in which we may even compare Old Major to Lenin. With the question mentioned, Old Major is inviting discussion on the subject, but also see how there is no talking during the speech as well as showing high respect for the pig, it also shows that Orwell means all the questions to be rhetorical and Old Major answers many, if not all, of them himself. The use of exclamations often follows the use of rhetorical questions, 'But is this simply part of the order of nature? Is it this land of ours is so poor that it cannot afford a decent life to those who dwell upon it? No, comrades, a thousand times no!' In this case, Orwell builds up to the climax of the speech with more and more rhetorical question which he then proceeds to answer in one sentence. ...read more.

The refutation continues for approx. two more paragraphs before old Major sums up his argument, has a vote and then proceeds to sing 'Beats of England'. This speech is successful and the rebellion occurs soon after. Unfortunately, (drawing parallels with Lenin) after his death there begins a power struggle between Napoleon and Snowball. This speech is successful because firstly, Old Major is old and wise which makes the animals want to listen to him, he has a point which is extremely relevant to his audience, he uses natu8re to justify his claims which can be very opinionated especially in the context of the natures versus nurture debate which encompasses issues like GM food and its ethical implications etc. Refutation and Peroration are also quite relevant, it is relatively esay for Old Major to reject a pro-hman argument because the animls have only experienced Mr Jones and so already hold an anti-human view. Perroration is also quite easy to do because, again this is extremely relavent and the song id a very good ending to the argument because it is an effective summary. TT: 1hr 45mins 1066 words 1 14/11/06 2 Rhetoric: the art of persuasion(11/10/06) ?? ?? ?? ?? ...read more.

A good essay that analyses structure, language and form. The expression and linking of points is a bit clunky at times and more fluidity in writing would enable improved effective written communication - which is now an element awarded marks at GCSE for all pieces.